Tim Tszyu opted to cancel, rather than postpone, his anticipated showdown with Michael Zerafa over concerns a delay could torpedo his chances of contesting for a world title in his next fight.

Tszyu will take on Steve Sparks in Newcastle on Wednesday, the Toowoomba-based fighter filling Zerafa’s void on just a week’s notice. The decision to go ahead with the event has raised questions over whether Tszyu’s handlers should have agreed to Zerafa’s request to postpone the bout until the latest COVID outbreaks in NSW had been contained. 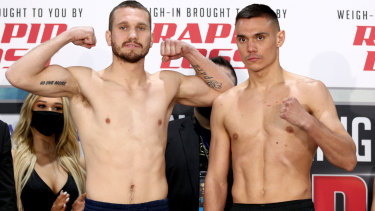 Tim Tszyu weighs in alongside Steve Spark in Newcastle on Tuesday.Credit:Shane Myers

“The decision keeps Tim in line for a world title,” said Tszyu’s promoter Matt Rose of No Limit.

“We needed to go before Charlo-Castano to stay on track for that shot. People say we should have waited two or three weeks for Zerafa, but it’s not that simple when you’re in the middle of a pandemic.

“We are on a very tight timeframe where we could do ourselves out of a world title shot by not taking a fight now.

Tszyu’s camp were also concerned that Zerafa could produce another excuse not to show up even if a postponed fight was granted at a time when a world title shot was there to be negotiated. 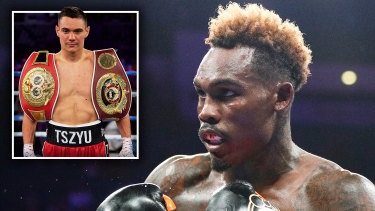 Tim Tszyu didn’t want to jeopardise a potential fight with Jermell Charlo by postponing a showdown with Michael Zerafa.Credit:Getty, Getty

“Once the winner of that Charlo-Castano fight happens, some decisions will be made around the first mandatory for that title,” Rose said.

“If we’ve still committed to fighting Zerafa, we could get counted out, that would place that opportunity in jeopardy.

“At the end of the day, it’s all about a world title for Tim. He’s worked too hard for us to be screwed on a technicality. We could be contracted to a fight that may or may not go ahead in two or three or however many weeks that forces us to miss the world title opportunity.

“It’s a risk to take on a new opponent on short notice, but we trust in Tim’s ability to get the job done.”

Tszyu and Spark weighed in on Tuesday, both bullish about their prospects of a knockout victory. Tszyu said he was already looking beyond Spark.

“I’m looking to the future. There are plenty of things ahead,” Tszyu said. “I’ve got the whole of Australia behind me and I want to welcome Australian on this journey for myself for the world title. There’s a long road ahead.”

Tszyu said he had sufficient style to study his new opponent despite the Zerafa pullout.

“I know him inside out. I know every punch he throws, every defence he does,” he said. “I know every movement he does before he does it. I know this guy like a book now.”

Asked what he said to Spark at the weigh-in, Tszyu said: “I was just letting him know the dream ends tomorrow. It’s back to reality.”

Tags: Real, reason, THE, Tszyu, wouldn’t
You may also like
Latest Posts