Tyson Fury predicted that he would knock out Deontay Wilder in “the biggest fight of my era” seven years before doing so in Las Vegas on Saturday night. The Gypsy King produced an unforgettable performance to become the WBC and Ring Magazine world heavyweight champion after stopping Wilder in round seven of their rematch at MGM Grand.

From the first bell, the Englishman took centre-ring and took the fight to his destructive opponent, avoiding that dynamite right which has worked so many times for the wild American.

After two rounds of consistent battery, Fury dropped Wilder in the third with a sweet left-right combination, the second discombobulating shot catching the defending champion on the side of the head.

Wilder hugged and dodged all he could but Fury continued to have frequent success, and a barrage of blows which finished with a gut-wrenching body shot sent Wilder tumbling to the canvas again in the fifth.

With bloody coming out of his ear and his face becoming increasingly misconfigured, Wilder’s team threw in the towel two rounds later after their man copped another series of blows on the ropes.

JUST IN: Man Utd player ratings vs Watford: Bruno Fernandes shines but midfielder gets a 4 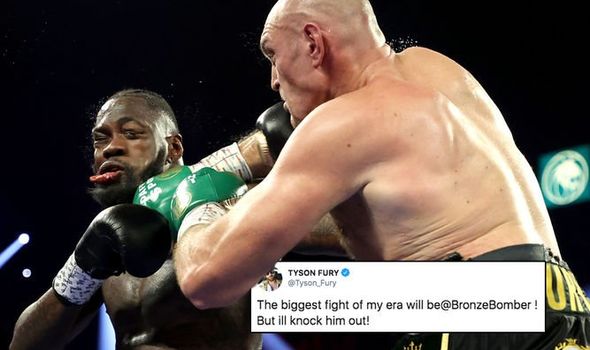 Fury, who put on 19lb from his last outing against Otto Wallin in September, said during the build-up that he was going for the knockout, which was largely received with rolled eyes from the boxing world.

But a man of his word Fury was proved – and it turns out his vow to knock out Wilder actually surfaced long before the immediate pre-amble to Saturday’s highly-anticipated sequel.

In October 2013, six months after getting up off the canvas to beat Steve Cunningham in New York, Fury sent a message to Wilder on Twitter.

“The biggest fight of my era will [email protected] ! But ill [sic] knock him out!” he wrote.

And the Bronze Bomber, who at the time had recently gone to 30-0, replied.

“@Tyson_Fury COME… COME… my friend,” he responded. “I will make it worth your wild, beside once I get this wbc belt it’s game over for you all!”

Fast-forward seven years, and Fury revelled in making everyone eat their own words.

“I told everybody with a pair of ears that the Gypsy King would return to the throne,” he said after the stunning victory. 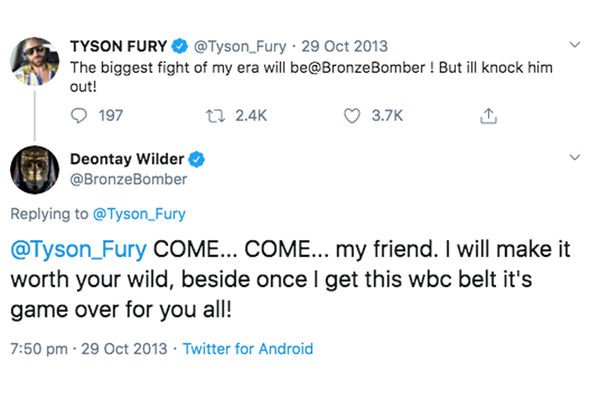 “My last fight everybody wrote me off. I was underweight and over-trained. I’m a destroyer. Not bad for someone with pillow fists.

“I’m a man of my word. I told Wilder, his team, the world. We trained for a knockout; we wasn’t tapping around in that gym.

“I talk like this because I can back it up. People write me off, they look at my fat belly and bald head and think I can’t fight.

“He fought the best Tyson Fury, we’re both in our primes. I expect him to ask for the third fight. I know he’s a warrior and I’ll be waiting.”