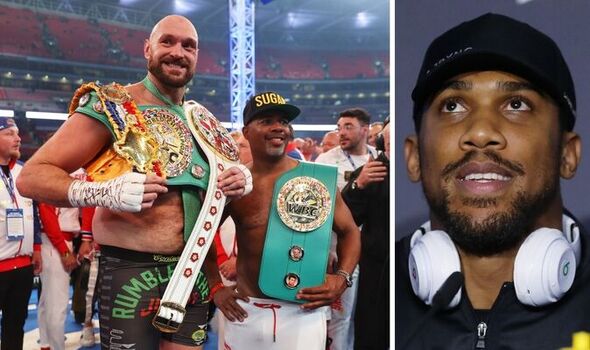 Tyson Fury’s SugarHill Steward has revealed the ‘mentally challenging’ side of fight negotiations have also played a factor in the Gypsy King’s decision to walk away from the sport. The WBC, Ring Magazine and Lineal heavyweight world champion has decided to hang up his gloves after his sumptuous sixth-round TKO victory over Dillian Whyte at Wembley on April 23, 13 years after his professional debut in December 2008.

Fury has long claimed he wanted to retire with ‘all of his brains intact’ as he looks forward to a peaceful, healthy future with his family.

Yet many within the sport of boxing are adamant the win over Whyte was not the last time we’ve seen Fury in the ring, as a potential undisputed fight against the winner of Oleksandr Usyk vs Anthony Joshua 2 looms large later this year.

SugarHill is not ruling out the prospect of a return from Fury but he’s revealed the mental side of fight negotiations has slowly eaten away at his fighter – much like many others within the sport.

This time last year, Fury looked set to meet Joshua in Saudi Arabia on August 14 for the biggest fight in boxing history and the undisputed heavyweight championship of the world.

However, a court arbitration saw him ordered to face Deontay Wilder for a third time – meaning the AJ fight was scrapped – before Fury took care of business in Las Vegas in October.

“For him being retired I’m happy because that’s what he wants. I know a lot of the retirement has to do with not getting the fights he wants and it’s really mentally challenging to be offered fights and go through negotiations for fights and then for them to fall through at the end.

“These things happen to many fighters around the world. You wouldn’t expect it to happen on this big stage but it does happen and it’s something fighters have to deal with.

“We on the outside sometimes don’t understand that. We just say ‘if he gets the fight he’ll come back’, it’s not as easy as being on the outside going through what happens on the inside.

“But it’s the sport he loves so much, and it’s hurting him like that. Those things have to be taken into consideration and respected.”

The WBC are expected to press Fury for an answer on his future in due course, so they can determine the future of the famous green strap.

Usyk holds the other three titles (WBA, WBO and IBF) but the heavyweight scene is expected to be shaken up in the next 12 months with Daniel Dubois and Trevor Bryan fighting for the WBA interim title in Miami.

Joe Joyce and Joseph Parker also look set to do battle in the coming months and the winner would be in line for a shot at the WBO title.

Furthermore, Wilder remains highly ranked with the WBC, should he wish to fight on after facing heavy punishment against Fury.

Filip Hrgovic was due to fight Zhang Zhilei in a final IBF title eliminator last weekend on the undercard of Canelo Alvarez vs Dmitry Bivol before the Croatian withdrew from the bout.