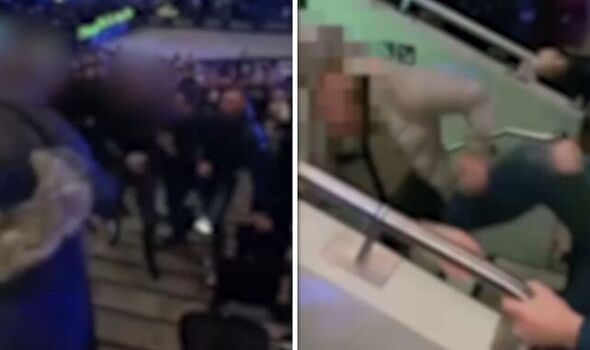 A mass brawl broke out at the Tyson Fury vs Derek Chisora event on Saturday as a pair of fans were sent tumbling down the stadium steps.

Fury battered Chisora from pillar to post in a one-sided beating at the Tottenham Hotspur Stadium this weekend. Despite a spirited effort from Del Boy, Fury was able to out-manoeuvre and out-land his old foe in a routine tenth-round stoppage in front of 60,000 fans. Amid the tedious display, a fight erupted between several punters that quickly turned into utter chaos.

The altercation – which was reportedly started by a row over seats – saw two men punched and dragged down a flight of stairs by a group of spectators.

Looking on in horror, one fan told the Daily Mirror: “One group of guys came in who had tickets somewhere else in the stadium and sat in seats that weren’t theirs. I think that is what kicked off the argument as it was over the seat allocation.

“Right after the fight, one guy shouted out, ‘You come over here’, and it was after a boxing fight so I’m guessing people watch the fight and feel like it themselves. It got a bit heated and the two groups started throwing punches. The guy that got chucked downstairs were kicked out by the group.

After beating Chisora, Fury now moves on to sterner tests. The Gypsy King is expected to face unified heavyweight champion Oleksandr Usyk in the first undisputed heavyweight unification clash of the four-belt era.

According to Usyk’s promoter Alexander Krassyuk, the fight is being targeted for a date between February 18 and March 4 in the Middle East. And there will be no shortage of promotional material after the pair came face to face following the Chisora trilogy.

“Usyk, you little b**** you’re next. Me and you Usyk, you’re next sucker. You little rabbit you’re getting it next. P****. Fifteen-stone little midget beat a bodybuilder well I’m not a bodybuilder,” said Fury as Usyk maintained an ice-cold stare from the side of the ring.

“I’ve already done one Ukrainian Klitschko and I’ll do you too gappy teeth. You ugly little man. Let’s get it on. You may laugh, but I will end you, you little sucker. What are you going to do? You’re going to do nothing.”