There are fears Tim Tszyu’s fight with Michael Zerafa could be called off after the latter was hospitalised with a mystery rib-stomach injury.

Zerafa was scheduled to fly from Melbourne to Sydney on Wednesday for a series of promotional commitments, but missed the flight due to the ailment. The diagnosis remains unclear, but the ailment is serious enough to raise fears from both camps that the July 7 bout in Newcastle could be scrapped. The venue, which had been renamed “Tszyucastle” for the occasion, is already a sellout. 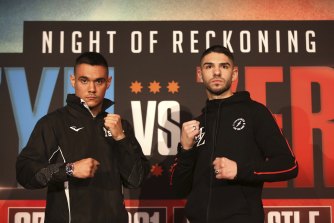 Zerafa’s trainer and co-manager, Sam Labruna, said it remains unclear what the health issue is and that the fight would be called off if his charge isn’t back in the gym by early next week.

“He’s still not right,” Labruna said. “I’ve spoken to his partner and he’s in a lot of pain, he’s been throwing up and everything. He’s not right.

“I’ll say one thing; to put it bluntly, if Mick is not right, there’s no fight. Simple as that. The fight is the last thing on my mind at the moment.

“We won’t be going through the camp if Michael is not right, the fight won’t be on.”

Presssed on the ailment, Labruna said: “The pain started behind the ribs and kept getting worse.

“For me, it’s about Mick’s health first. I won’t be putting Mick in underdone.”

Zerafa attempted to check himself into hospital on Tuesday night, but a long queue prompted him to return home. However, he returned to seek medical attention on Wednesday when his condition didn’t improve. Labruna said the issue didn’t appear to stem from any blows he had received during sparring.

“The fighters’ health is the main thing, but it’s a nightmare [for the promotion] if it is serious.

“The fact the boxers push their bodies to the absolute limit, I understand and respect that. I know things like this can happen, but I don’t want it to happen for this fight.

“There’s nobody else around who can compete with Tim and we’re not going to chuck him in against a sub-optimal replacement.

“It’s something we want to get on top of.”

The Tszyu-Zerafa bout has been years in the making. The pair had signed a contract to fight each other several years ago, although the son of hall-of-famer Kostya pulled out due to a hand infection.

Now that Zerafa’s fitness is clouded, his camp won’t proceed unless he has the appropriate time to recover from the setback.

Tags: hospitalised, myste, with, Zerafa
You may also like
Latest Posts