Teenage Sydneysider Stephanie Kyriacou pulled off a stunning eight-shot victory over an international field of professionals in the Australian Ladies Classic.

The 19-year-old shot a closing seven-under-par 65 to triumph with a 22-under 266 total at the Bonville course near Coffs Harbour on Sunday. 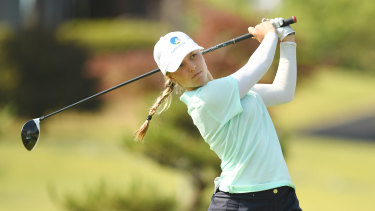 Eleven shots clear at one stage after making seven birdies in her first 10 holes, Kyriacou won from South Korea's Ayean Cho (70) with Sweden's Linnea Strom (66) a further shot back.

The tournament was co-sanctioned by the Ladies European Tour and also featured a contingent of Americans after their Asian swing was cancelled due to coronavirus.