Tournament host Danny Willett felt a completely different person after charging into contention for the Betfred British Masters at the Belfry on Friday.

Willett was three over par after 12 holes of his first round and admitted he feared making an early exit before having to return on Sunday evening to present the trophy to the winner.

Two late birdies meant the former Masters champion eventually signed for an opening 73 and he carried on where he left off on Thursday, making eight more birdies. 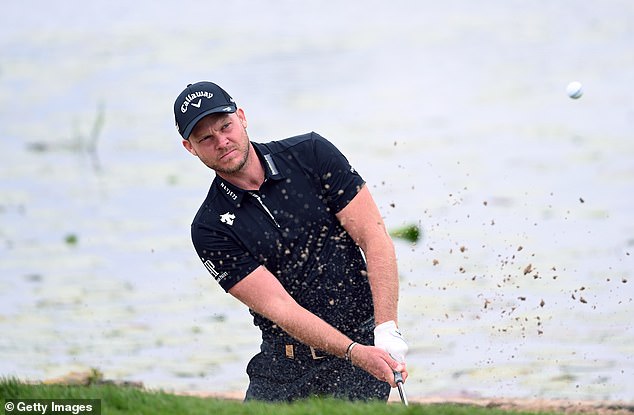 ‘Today felt like myself (playing), yesterday felt like my brother,’ joked Willett, whose 65 gave him a halfway total of six under par, three shots behind clubhouse leader Hurly Long, of Germany.

‘I wasn’t quite expecting that. I giggled to myself, I think we were 99th on the 16th green last night and then looked up there today and we were fifth.’

It was an impressive performance given his hosting duties, with last year proving far easier due to the absence of spectators because of Covid restrictions.

‘I didn’t have to do anything last year apart from a lot of Zoom calls,’ Willett added. ‘I had a lot of spare time last year, no one here for pictures and that sort of stuff and I think it does make a difference.’

Scotland’s Richie Ramsay, the leader after the first round, added a bogey-free second round of 69 to his opening 67 to sit one shot off the lead having dropped just one shot in the first 36 holes.