Melbourne’s Robert Allenby emerged as the brightest golf prospect in Australia since Greg Norman burst on the scene in 1976, when he won the $700,000 Johnnie Walker Classic at Royal Melbourne yesterday. 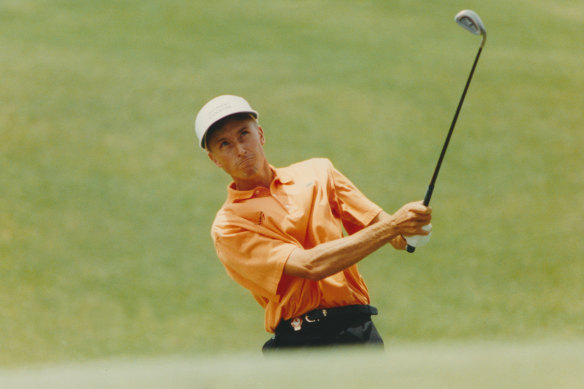 Robert Appleby chips to the third green at the 1992 Johnnie Walker Classic at Royal Melbourne.Credit:Jason Childs

The willowy youngster from Chadstone, who almost won the Australian Open as an amateur on the same course a year ago, showed maturity and poise far beyond his 21 years in leading the tournament from beginning to end and taking the title by five shots from Peter Senior. 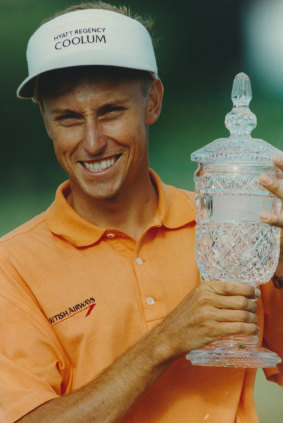 Allenby’s performances as an amateur — he was the first to win the Victorian Open and he lost the national title by a shot to Wayne Riley last year — alerted us to the fact that he was something special. A consistent rise through the pro ranks, which he joined at the end of last year, produced his first victory in Malaysia two months ago.

That was promising, but, achieved as it was against average competition, it did not mark him down as the man who would humble a field that included Ian Baker-Finch, Wayne Grady, Davis, Mark Calcavecchia and Colin Montgomerie in the wind at Royal Melbourne.

Allenby did not just beat them, he gave them a lesson in how to play the composite course. His student for the first two days was Baker-Finch, the 1991 British Open champion who took him out for a practice round at Royal Birkdale before the championship last year and invited him to his home for the victory party afterwards.

Allenby’s playing partner on Saturday was friend and sparring partner from the amateur days, Mark Allen, who is also showing promise as a pro. Allenby shot 68 and Allen had 78 in the atrocious wind conditions. In yesterday’s final round, Allenby again played with the second-best man in the field, Senior, and the stage was set for a thrilling finish.

It was the kid against the nuggety Queenslander, who trailed by four shots, and it seemed more a battle of wits than skill. Senior had won the title twice before and brought to bear 12 years of campaigning on the European front as well as a formidable reputation for winning big events at home.

Would the kid falter? Not a bit of it. He birdied the first three holes and increased his lead. As the field battled the 40-knot south-easterly winds that turned Royal Melbourne into the severest test of golf, Allenby skipped away. His lead over Senior varied from four shots at the start of the day, to nine shots at the sixth hole and back to five at the end. No one else got within a bull’s roar and Allenby walked away as, arguably, the best rookie Australia has seen.

Judged purely on money terms, no one can get near him. He has topped the money list with winnings of $308,528 in his first year at home and collected another $130,000 in Europe. Next week, by virtue of yesterday’s win, he will compete in the Johnnie Walker World Championship in Jamaica, where the first prize is $680,000.

Senior, who collected $75,600 to Allenby’s $126,000 yesterday, said he thought he might have been able to exploit his opponent’s youth by jumping him at the start, but when Allenby rolled in an outrageous, 20-metre birdie putt at the first and followed it with more birdies on holes two and three, his options were very limited.

“Then he followed it up with a par at the fourth, the most difficult hole on the course. He did what he had to do. After that, it was just a matter of hanging on. He did that very well.

“He is going to be a very good player. He had his short game working this week. You can tell by the way that he strikes the ball that he has a very big future,” Senior said.

“I have not played with a 21-year-old as good as Robert. To find a comparison, you have to look at players like Seve Ballesteros and Jose-Maria Olazabal, who did similar things when they were 19 and 20. He’ll be kicking out old guys like me soon enough.”

Apart from winning in emphatic fashion, the main difference in Allenby yesterday was his demeanour. Gone was the tension, or even apprehension, that he used to take on to the course, and in its place was a composure that was startling.

He said that much of the credit belonged to Melbourne caddie Craig Thomson, who parted company with Mike Harwood recently, for relaxing him in the heat of things. For his pains, Thomson has won the job that caddies covet most. When Allenby wrote in ‘The Age’ recently that he was looking for a bagman, he received 100 written applications.

“He is the best caddie I’ve ever had,” he said. “I have never been so relaxed on a golf course. It is my new image. I am going to smile a lot more.”

Allenby said he knew he had the title won after 14 holes. “I was walking down 15 and I was six shots in front,” he said. “The atmosphere was great, and I was feeling confident about the way I was playing.”

Apart from the glory, topping the money list means that Allenby, who this year secured a place on the European circuit for 1993 and is exempt for the British Open, can also play in some of the biggest titles in America, including the US PGA, the US Open, the World Series, the Tournament Players’ Championship, the International tournament and Jack Nicklaus’ Memorial event at Muirfield Village. It would not surprise if he was invited to the US Masters as well. Not a bad first year.