LIV Golf is preparing to host its third event at the Trump National Golf Club Bedminster – and former President Donald Trump ensured the build up received media attention. The 76-year-old played in the LIV Golf Pro-Am and hinted he is gearing up to run for office in the 2024 United States presidential elections.

Trump’s son Eric, along with major champions Dustin Johnson and Bryson DeChambeau, joined him in the pro-am group, which was played without spectators. The event is being hosted ahead of the third LIV Golf event, which begins on Friday and will cover 54 holes in three rounds with a prize pot of just over £20 million.

Several of the world’s most prominent players have decided to switch to LIV Golf, including the likes of Phil Mickelson, Brooks Koepka, and Johnson. Branden Grace secured a two-stroke victory at the second LIV Golf event – which took place in Portland, Oregon – to earn a £3.37 million payout, more than the £2.08 million awarded to Australian Cameron Smith for securing the coveted Open title last week.

Trump, whose loose adherence to golf’s strict rule book has seen the avid player scrutinised, teed off alongside his son, Johnson and DeChambeau in the Pro-Am event. Asked by a reporter on the first tee if he intended to announce his candidacy for the 2024 presidential election, Trumps said: “You’ll be so happy…we’ll let you know pretty soon.” 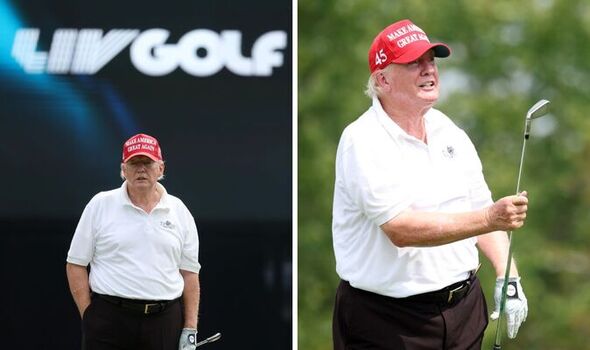 The two pros clapped and cheered when Trump sent his first drive straight but just off the fairway. After the shot, Trump turned to a group of onlookers – which included his daughter Ivanka and her husband, former White House adviser Jared Kushner – and said: “Glad that’s over with.”

Trump, who owns a number of elite golf courses throughout the world, will also see the season-ending LIV Golf event played at his Doral course near Miami. LIV Golf have created a divide in the sport, with Trump naturally lending his voice to the issue by taking to Truth Social to brand the PGA Tour as disloyal.

Players who have joined the LIV Golf series – which is bankrolled by a Saudi Arabian government renowned for their human rights abuses – were handed immediate and indefinite bans from the PGA Tour, while the DP World Tour have implied they will fine the rebels and suspend them from future events but they haven’t issued a ban just yet. 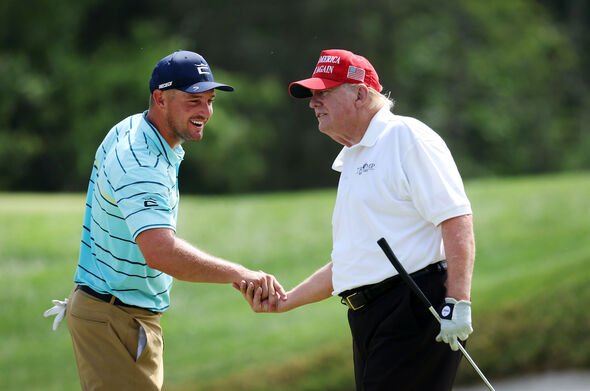 However, LIV Golf’s defectors may be barred from entering the four majors next year. Martin Slumbers, the chief executive of the R&A, dismissed the breakaway competition as ‘entirely driven by money’ before suggesting the iconic body will ‘review our exemptions and qualifications criteria for the Open’.

One possibility being reportedly considered is the exclusion of players suspended from either the PGA or DP World Tour. It would ultimately be considered an enormous blow to the hopes of rebels, particularly if the four majors work together to expel all such players.