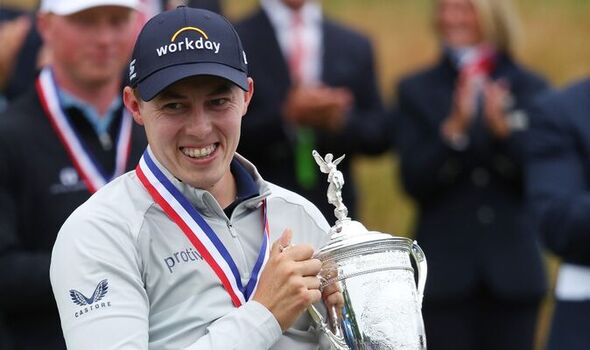 Matt Fitzpatrick has joined an illustrious list of golfers in clinching his first major after beating Will Zalatories and Scottie Scheffler to win the 122nd US Open. Fitzpatrick has fond memories of The Country Club in Brookline, Massachusetts having won the US Amateur there back in 2013.

And he returned to the course for this year’s US Open to become a major champion for the first time in his career. He also becomes just the fourth Englishman over the past 100 years to win the US Open, joining Justin Rose, Tony Jacklin and Cyril Walker.

Fitzpatrick also joined Jack Nicklaus in becoming one of only three players to ever win the US Amateur and US Open at the same venue, and the Englishman had a few words for the American golf icon.

“I don’t know if Jack’s listening to this but he gave me a bit of abuse at the start of the year,” he said. “I won the member-member at his club, the bear’s club, and he said finally congratulations on winning in the States. “So I can go back to him and say, ‘Jack, I’ve won a second time this year’.”

The 27-year-old has long been tipped to become a major champion but his tied-fifth finish at the PGA Championship last month was just his second top-10 in a major since turning pro in 2014. But Fitzpatrick was in great form from the opening round on Thursday this week as he carded an opening round of 68 to put him inside the top-10.

JUST IN: Phil Mickelson hits fan with ball at US Open as others rush to his aid

A small dip on Friday saw him drop back from overnight leaders Joel Dahmen and Collin Morikawa. That all changed on moving day though as Fitzpatrick was dialled in to hold the overnight lead along with Zalatoris heading into the final round.

Zalatoris and Fitzpatrick flip-flopped between them to share the lead but 2022 Masters champion Scheffler wasn’t going anywhere either. All three appeared to be keeping cool despite the leaderboard continually changing, but Fitzpatrick appeared to take a charge when he holed a stunning 48-foot putt on the 13th to take the lead.

He followed that up with another brilliant birdie on the 15th while Zalatoris bogeyed the same hole. Scheffler was playing in the group ahead and finished his tournament at five-under par, one shot behind Fitzpatrick’s score at the time.

Zalatoris missed a great chance to level the scores heading into the final hole, but Fitzpatrick gave his opponent a chance on the 18th when he sent his drive into a fairway bunker. But Fitzpatrick showed his championship credentials with arguably the shot of the tournament with an 8-iron landing softly on the green with Zalatoris placing his just a foot inside the Englishman’s.

Fitzpatrick was up first and he missed his birdie putt just short, giving Zalatori a chance of forcing a play-off. There was silence around the course as Zalatoris stepped up for his 12-footer, but it trickled agonisingly wide of the hole for the 25-year-old.

Zalatoris fell to his knees as Fitzpatrick’s family were seen on the side of the green celebrating with the Englishman officially crowned US Open champion. Tears flowed as Fitzpatrick hugged and embraced his family, before he also shared some words with Rory McIlroy, who was standing outside watching the celebrations.