Phil Mickelson had a strange experience on the 11th hole when a fan picked up his ball following his teeshot. The American was well on his way to becoming the oldest major champion in history after a strong start to the final round.

Mickelson held a four-shot lead over the likes of Brooks Koepka and Louis Oosthuizen heading into the 11th.

Mickelson’s wayward tee shot on the long par five ended up heading out left into the crowd and immediately a crowd descended on it.

But there was drama by the time Mickelson got to his ball as it soon became clear that someone had picked it up.

A bunch of spectators were speaking to the five-time major champion to say that a woman picked it up and then dropped it a few inches away from where it landed. 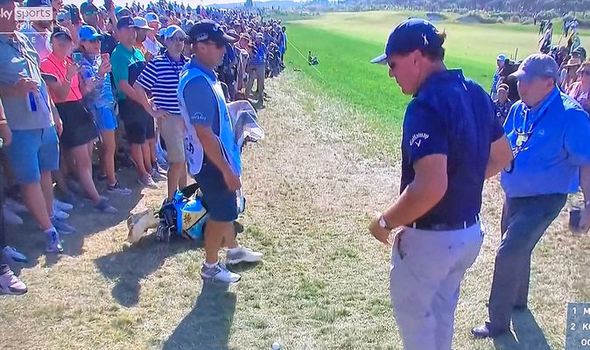 Mickelson called for an official before also speaking to Koepka about what to do.

After a back-and-forth with a course official and a bunch of spectators, Mickelson was able to joke about the situation.

The 50-year-old was able to pick up the ball and clean it before placing it back down to where they suspected it landed.

Mickelson ended up saving par on the hole while playing partner Koepka recorded another bogey.

Tags: autoplay_video, Phil Mickelson
You may also like
Latest Posts