Jon Rahm had a hole-in-one at the World Golf Championship event in Mexico on his way to a course record 61 but he still finds himself four shots behind third-round leader Justin Thomas.

Thomas started and ended his round with bogeys but he was at his best in the 16 holes between, running off eight birdies for a six-under 65 to be 15-under. 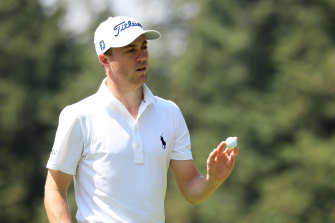 Justin Thomas has the lead in Mexico.Credit:Getty Images

Two years after losing a playoff to Phil Mickelson, Thomas has a chance to avenge that near-miss and claim a 13th PGA Tour victory and third this season.

"I really want that first place. I definitely feel like I have a bit of unfinished business here," Thomas said.

The American world No.4 was five shots behind in the middle of his front nine at Chapultepec Golf Club but wound up with a one-shot lead over Patrick Reed and South Africa's Erik Van Rooyen (both 67s).

However, no one illustrated how quickly fortunes can change like Rahm, who started the third round 10 shots out of the lead and goes into Sunday in the penultimate group.

The Spaniard opened with six birdies in seven holes – four of those birdies from inside four feet – and really excited the crowd with a gap wedge on the par-three 17th that took one big hop and disappeared into the cup for an ace.

That carried him to a remarkable 10-under 61, the low round of his young career.

Better yet, Rahm is in the mix in Mexico, tied for fourth at 11-under along with world No.1 Rory McIlroy (68) and Bryson DeChambeau (71).

"I'm just really happy that after the first two days I'm going to have a legitimate chance tomorrow without needing to shoot 59 or something like that," the world No.3 Rahm said. 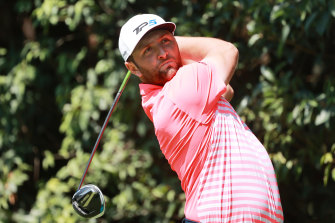 England compatriots Tyrrell Hatton and Paul Casey both carded rounds of 66 to be at 10-under and sharing seventh.

Youngster Zach Murray, in his debut WGC appearance having earnt his place in the field via his position on last year's PGA Tour of Australasia Order of Merit, is best of the Australians in a share of 15th at four-under after a 69.

The 22-year-old is the world No.430 but it certain to soar up the rankings after this week.

Next best of the Aussies is Adam Scott, last week's winner on the PGA Tour, after a 68 left him at three-under while Marc Leishman (68) is one-under.

Cameron Smith, Lucas Herbert and Scott Hend are all over par.

Tags: and, cour, gets, hole-in-one, Rahm
You may also like
Latest Posts