World number one Scottie Scheffler claimed a share of the early clubhouse lead as Brookline turned ‘nasty’ on day two of the 122nd US Open.

Scheffler added a second round of 67 to his opening 70 to join world number 371 Nick Hardy at the top of the leaderboard on three under par.

The Masters champion was two over after seven holes but then birdied the eighth and 13th, holed out from 55 yards for eagle on the par-five 14th and picked up another shot on the 16th in his bid for an amazing fifth win in 2022. 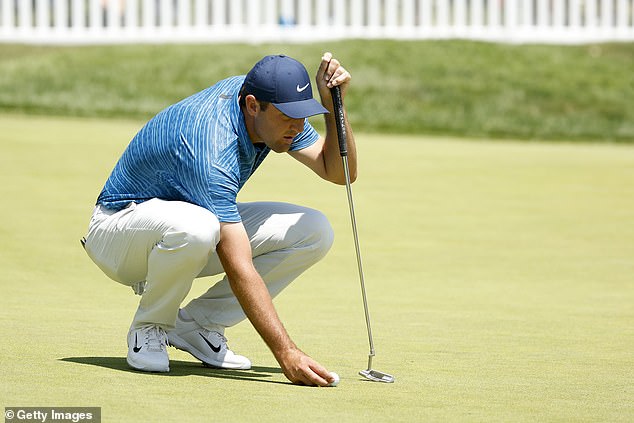 ‘I just stayed really patient,’ Scheffler said. ‘I was hitting it good pretty much most of the day. Two silly bogeys early in the round, but outside of that I hit it really good.

‘If a few more putts would have fallen in versus (running) around the edge, it would have been a really special day. But three under was a good score for me, especially being two over through six.’

Speaking about his eagle on the 14th, Scheffler added: ‘I hit a great drive down the middle and then had kind of a funny lie where it was sitting on a downslope and it made that shot into the green much harder.

‘I caught it a hair thin and hit the tree. Fortunately it didn’t hit the tree and come backwards, it kind of just fell down in front of it. Had a good lie and hit a good chip and it went in.’

England’s Matt Fitzpatrick recovered from a hat-trick of bogeys to play his final five holes in two under par and lie just a shot off the lead following a second round of 70.

‘I played really, really well,’ said Fitzpatrick, who was fifth in the US PGA last month and won the 2013 US Amateur at Brookline. ‘Three of my four bogeys were three-putts, so that kind of sums up the day.

‘Felt like I hit the ball tee to green really, really good. I think I hit one chip shot all day, so that kind of summarizes how well I felt like I hit it. I feel like I’ve left a couple out there, which to say in a US Open is pretty rare, but it is positive going into the weekend.’

Twenty-five players had recorded scores in the 60s in the first round, equalling the second most in tournament history and just two behind the record of 27 at Pebble Beach in 2019. 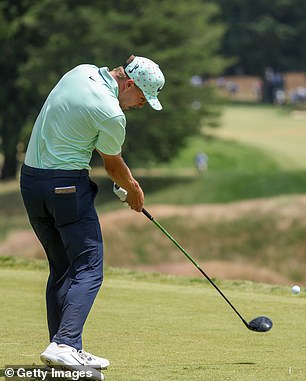 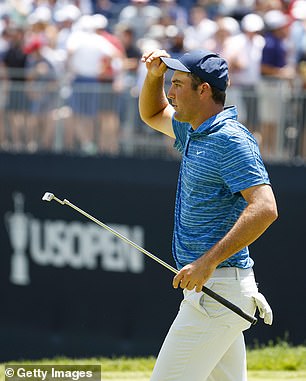 World No 371 Nick Hardy shares the early lead with Scheffler, who is going for a second Major

But with a blustery wind helping to dry out the course, six-time major winner Nick Faldo predicted conditions would continue to get tougher over the weekend.

‘It really is nasty, gusty, blustery, and there are some really tough holes,’ Faldo, who lost a play-off to Curtis Strange in the 1988 US Open at Brookline, said after completing commentary duties for American broadcaster CBS.

‘To be honest anybody in red numbers will be very happy and in a great spot. It’s only going to get tougher. They can let this course go and it could be really tough.’

South African qualifier MJ Daffue could attest to that after enjoying a three-shot lead when he holed from 80 feet on the seventh to reach six under par, only to play his last eight holes in five over.

‘The back nine was disappointing,’ said Daffue, who nevertheless had produced a contender for shot of the tournament by hitting his second shot off the carpet on the outside of a hospitality tent to near the green on the 14th.

‘I did the simple things really bad but if you’d told me before yesterday I would be one under par in the top 15 after finishing my round today, I would have said yes.’

World number eight Viktor Hovland had been just a shot off the lead after two early birdies, but bogeyed six holes in a row around the turn and dropped three more shots on the closing stretch to shoot a dispiriting 77.