An emotional Matt Jones said he hadn’t reached his potential after joining an elite group of Australians to have won twice on the US PGA Tour, with his coach predicting better days ahead for the 40-year-old.

Two-time Australian Open champion Jones booked his ticket to next month’s US Masters with a nerveless five-shot win in the Honda Classic on Monday morning (AEDT), banking the biggest cheque of his career ($1.63 million). 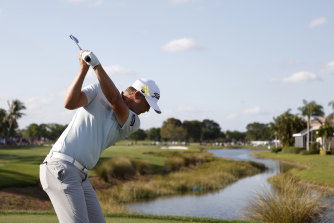 Matt Jones plays a shot on the 16th as he closes in on victory at the Honda Classic.Credit:Getty

“It’s not as if they’ve lost the drive to play. And Augusta is a course that does suit [Jones], but you’ve got to know your way around there well.”

Jones fought back tears as he stepped off the 18th green in Florida a five-shot winner from American Brandon Hagy, seven years after his first US PGA Tour win at Houston.

He has won his national open twice, both times at his home club The Australian in Sydney, between victories on American soil.

“I’ve probably underachieved, in my opinion, for what I could have done,” Jones said.

“But I’ve got some time left. I’ve spoken to Adam Scott about this. We’ve got five really good hard years ahead of us, where we think we can do something special, and I think this sets me on a path where I could.

“Seven years between wins [on the US PGA Tour], it’s been a battle. I’ve had ups, I’ve had downs, but to win a second time on this golf course in these conditions that we faced all week is, it’s phenomenal and hopefully it’s something I can build on for the rest of the year.”

Jones hit 17 of 18 greens in regulation during his final round, safely negotiating the famous “Bear Trap” on the 17th hole. It was a rare show of emotion from Jones, who is known as one of the fastest players on tour.

“Many players can win once [on the US Tour],” Barter said. “But to win twice is a different deal.

“It’s really been a battle the last 18 months and we’ve got his putting back. You think it would be something simple to do, but it’s not. I just think his putting is back and his ball striking has got fractionally better.”

Cameron Davis (even) finished tied-33rd at the Honda Classic, while European winner Lucas Herbert was two strokes further back in 46th.

Tags: calls, daily, FaceTime, that, THE
You may also like
Latest Posts