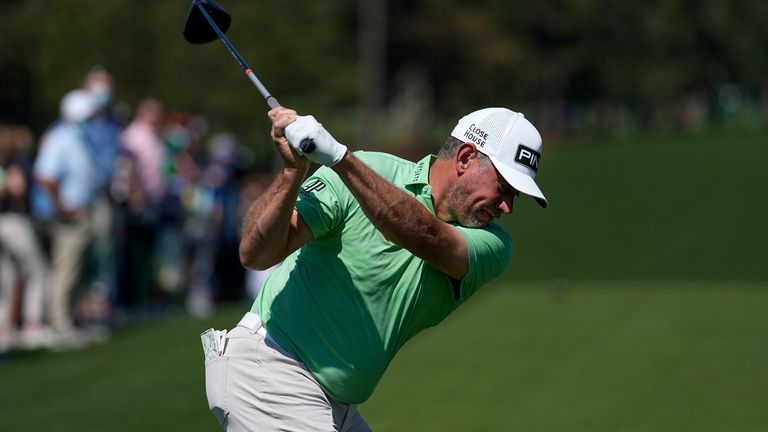 Lee Westwood says the chance to create father-son glory alongside caddie Sam and replace Jack Nicklaus as the oldest winner at The Masters would be “very special”.

The 47-year-old Englishman arrives at Augusta National, scene of two runner-up finishes, bidding to emulate Nicklaus who won his sixth and last Green Jacket at the age of 46 with son Gary as his caddie in 1986.

Westwood is making his 20th appearance at The Masters this week and his back-to-back runner-up finishes at Bay Hill and The Players last month have offered belief he can end his long wait for a first major.

“Jack has always been an inspiration the way he played the game, especially his record around here. You can’t help being inspired,” Westwood said on Tuesday.

“There’s a few similarities there with age. It would be great to break his record.”

Who is [email protected] pic.twitter.com/2qL0TZzml4

Westwood, who played alongside Nicklaus in the final round on his debut at The Masters in 1997, added: “I went out on the Saturday night and bought the picture, the iconic one where he’s following the ball into the hole on 17 with his putter. And after we played on the Sunday, I had done enough to qualify for the following year, fortunately.

“I said to Jack, “Would you mind signing this picture for me?” I still have it to this day all framed up where he’s put, “Lee, enjoyed our round, best wishes, Jack Nicklaus.”

“There’s very few people you would do that with. He’s a legend of the game and arguably the greatest player to ever play the game. His record in the major championships and especially Open Championship and here, you know, is second to none.

“I always enjoy speaking with Jack and picking his brains and just being in his company, really. To have a chance to break one of his records would be very special.”

Westwood believes his recent good form, which also saw him become the oldest player to claim the European Tour’s order of merit title last December, is “validation” he can compete among the best.

But despite that, he insists he is not placing any added pressure on his shoulders ahead of the first men’s major of the year.

“Yesterday I had a practice round, and today I’ll play nine and tomorrow even less. Like we said, I’m 48 in a few days’ time, and the secret is to tone the practice and the training down as Thursday comes so I’m fresh.

“My legs probably won’t take as much as a 20-year-old’s legs will take, and this is a physically demanding golf course. I have to scale that back.

“I just put the preparation in, hit it off the first tee and try and find it and hit it on the green, and hopefully hit it on the green and have a birdie chance and make a few of those. After that, it’s in the lap of the gods, really.”

Westwood is among a 10-strong English contingent at Augusta but does not feel there is a particular sense of pride among the group to impress.

“We are all here as individuals,” he said. “But I think en masse, yeah, we are probably the strongest contingent of Englishmen for quite some time.”

Tags: Augu, Masters, Sky, Sports, US
You may also like
Latest Posts