St Andrews: Tiger Woods said he was moved to tears as he walked down the 18th fairway and – though he had not been minded to stop on the Swilcan Bridge, site of the traditional farewell for departing champion golfers – his caddie stood aside and left him to walk alone.

The 15-times major winner removed his cap to acknowledge the cheers that had been getting louder and louder as he played the Old Course’s back nine. 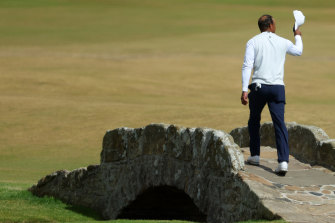 Tiger Woods crosses the Swilcan Bridge at St Andrews – possibly for the last time at a British Open. Credit:Getty Images

Although Woods was very clear that this would not be his final Open, St Andrews is unlikely host it again for at least five years – there is every chance Woods’ body may not stand up to the rigours of tournament golf until it next returns to St Andrews.

“So, to me, it felt like this might have been my last British Open here at St Andrews. And the fans, the ovation and the warmth, it was an unbelievable feeling.

“As I was walking off the tee, I felt the guys stop and I looked around, where the hell is Joey [LaCava, my caddie]? He stopped back there, so I gave him the club. That’s when I started to realise, hey, that’s when I started thinking about the next time it comes around here I might not be available to play.”

Woods, professional as ever, added that his thoughts after he left the 17th green were not what he was going to do at the bridge, but merely which club to hit from the tee.

“I was just thinking about a five-wood or three-wood. Hit five-wood yesterday, got there and rolled back,” he said.

“Today the wind has switched and we got a little moisture on the ground. So now it’s possibly three-wood.”

The three-time Open champion – two of the wins on this course – opted to try “a chipped three-wood”, lipped out with his birdie putt and finished with a three-over 75 to add to his first-round 78. He missed the cut comfortably, but nobody present seemed to care. They just cheered. 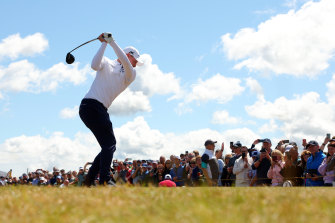 Tiger Woods tees off on the 13th hole at St Andrews.Credit:Getty Images

Woods said he had also been moved by the sight of his friend Rory McIlroy, who had just teed off at the adjacent 1st hole, stand aside before playing his second over the burn and tipping his cap. There was more of the same on the 1st tee, with his young protege Justin Thomas about to get his round under way.

“The warmth and the ovation at 18, it got to me,” said Woods. “And I felt the guys stop there off the tee on 18, and it was just incredible. Just the amount of understanding and respect from all the people that are involved in this event, that come out in support of the players, the nods I was getting as the players were going out.

“I looked over there, and Rory gave me a tip of the cap. JT did the same. It’s just there’s something to it that’s just different.”

The fairways were lined with people four or five deep, the stands were packed, spectators in the adjacent The Links (Corr) road were even deeper. Others craned their necks from rooftops and balconies with a view as the strains of a distant piper floated through the air. 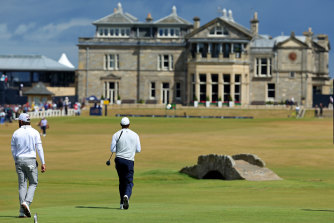 Tiger Woods walks from the 18th tee towards the Swilcan Bridge at St Andrews.Credit:Getty Images

The former world No.1 added that he had no plans to play tournament golf again this year, but he did hold out some hope for the people of St Andrews that they may see him again. He may well play the Old Course socially in the future.

“I’m sure my son will probably want me to come back here and play,” he said. “I was fortunate enough to have gotten an honorary membership to The R&A. I have my locker here right when you walk into the left here. That’s pretty neat. And because of that, I’m able to get a tee time.”