‘It was crazy how it all came together for me to win’: Tiger Woods relives his Masters miracle… and how his children fought to wear the green jacket on the plane home!

Eleven months on from his Masters miracle and Tiger Woods’ sense of wonder has only grown.

As the countdown begins to his return to Augusta National, the 44-year-old on Tuesday revealed hitherto unknown nuggets regarding that fabulous Sunday last year and its tumultuous aftermath.

Picture the private plane ride home to Florida, for example, and his two kids Sam, 12, and Charley, 10, desperate to slip on the green jacket. ‘What made it special is they’d seen me fail at the Open the previous year, when I didn’t get it done on the Sunday and now I had won,’ said Woods. 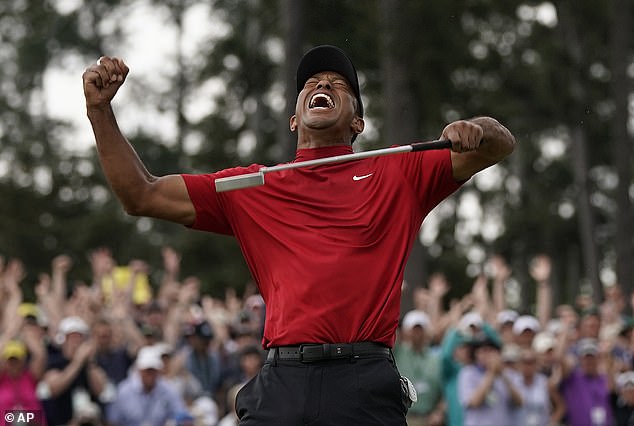 Tiger Woods will return at Augusta as defending champion, 25 years since he made his debut

That Sunday, of course, was something most of us will not forget.

‘I had an amazing number of emails and texts flowing in, but I was more surprised by the videos,’ recalled Woods. ‘Seeing the reactions of people watching it on planes, in restaurants or at airports, and the number of people riveted by the Masters simply blew my mind. I was just trying to win the event and I couldn’t imagine so many people were going to be moved that way.’

It was a month after the final putt that Tiger finally sat down to watch the last round and see it from a different perspective. He invited his caddy, Joey LaCava, and they relived every shot. The miraculous up and down at the 9th to stay in touch; the par-three 12th where the leader Francesco Molinari put his ball in Rae’s Creek. The purest shot he struck all day, a four iron to the 15th green. Finally, the 18th, where the magnitude of it all hit home. 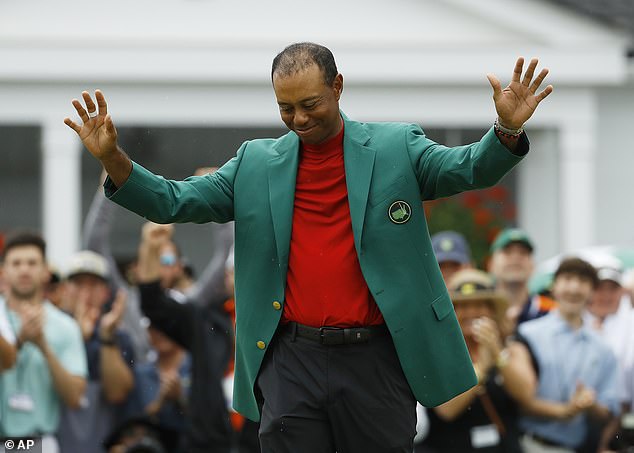 His two kids Sam, 12, and Charley, 10, were desperate to slip on the green jacket on way home

‘I must admit, I had to back off the putt there because of the emotion,’ he said.

Only when the subject turned to his current health – he complained of a stiff back during the recent Genesis Invitational – did Tiger become circumspect, offering no clue as to where he will play during the build-up. ‘The plan is to hopefully prepare the same way, because it worked, right?’ he said.

When Tiger drives down Magnolia Lane to begin his title defence, it will mark 25 years since the five-time Masters winner made his debut as a raw 19-year-old amateur.

‘Now I’m part of the Masters story, I don’t need to be so embarrassed about what happened that first time,’ said the American. ‘My first hole, a putt for birdie – and I putted it right off the green! I tell that story to amateurs now, to help them relax. Twenty-five years later, I’m going back as the defending champion, and I like the sound of that. It was crazy how it all came together for me to win, for so many things to go right.

‘Looking back, to have had the relationship I’ve had with Augusta, the beauty of the place is just unlike anything else in our sport.’

Tags: his, Master, relives, Tiger, Woods
You may also like
Latest Posts