1. Among my pet peeves in this NFL age of analytics are those pervasive win probabilities so often cited when some team makes what the statheads want you to think is a virtually impossible comeback. For example, ESPN gave the Giants a 96.9% chance of beating the Eagles on Thursday night after New York took an 11-point lead in the fourth quarter. The Falcons stood a 98.7% shot to beat the Lions on Sunday afternoon while up 22-16 in the final period – really? the Falcons? – though it was a more realistic 74.2% before the final play, the one when Matthew Stafford threw the game-winning TD for Detroit. That, incidentally, occurred right after NFL RedZone channel had flashed that the Lions stood a 4% chance to win despite only requiring an 11-yard TD. (Just … stop. When they're going for the score on the final play every time, they'll only succeed four times out of 100? Come on.) Y'all need to adjust the slide rules, build a better algorithm, start paying better attention or some combination thereof. ICYMI, entering Week 7, at least one team each week of this season had surmounted at least a 16-point deficit to win – with a backdrop of points being racked up at a faster rate league-wide than at any time in the NFL's previous 100 seasons. It sure feels like coin flips would be a better predictive device sometimes than these ubiquitous and ever-changing win graphs.

It was Atlanta’s 3rd loss this season with a win probability of at least 98%, the most by a team in the last 20 seasons.

The rest of the NFL has 4 such losses combined this season. pic.twitter.com/EqJnds0et1

2. Incidentally, tip of the cap to Lions K Matt Prater, who had to hit a 48-yard extra point for the win after an unsportsmanlike conduct penalty was assessed to Detroit WR Danny Amendola following Stafford's TD strike to TE T.J. Hockenson.

3. Game-ending drama aside, Lions at Falcons had to be one of the most unwatchable games I can recollect. That opinion had nothing to do with the quality of the teams, play or players … but due to the awful uniform presentation. Detroit's monochrome silver – functionally, a load of gray – is among the league's worst alternate kits … but far less putrid than the black-and-red gradient look Atlanta unveiled Sunday. Roger Goodell should consider heavy fines for both teams for this visual crime – one that will be widely perpetuated as we see the highlights of a game where the momentum constantly flipped in the final period.

4. But the locals had to be happy, since rooting for two former University of Georgia stars – Lions RB D'Andre Swift and Stafford – trumps one, Falcons RB Todd Gurley.

5. And though Gurley's inability to fall short of the goal line with 64 seconds to go probably cost Atlanta the win – he stumbled forward and broke the plane while seeming to know the better play was falling short and letting the Falcons bleed the clock before attempting a game-winning field goal in the final ticks – his fantasy fans love him for his inability to resist the end zone's siren song, even if he'd shown such situational discipline before while with the Rams.

[email protected] crosses the goal line to give the @AtlantaFalcons the lead!

5a. "I was mad as hell," Gurley said of his accidental TD. "I was trying not to. My momentum took me in. … I've been in plenty of those situations since my rookie year, about six or seven. I've always got down, just an unfortunate one right there."

6. Pirates in Pewter Pants > The Autumn Wind is a pirate

9. Garoppolo has never lost as a starter at Gillette Stadium … OK, he's just 2-0.

10. The Pats' 27-point loss was their worst at home during the Belichick era.

11. New England didn't possess the ball for even 22 minutes nor did it enter the red zone Sunday.

13. Brady and TE Rob Gronkowski have now hooked up for 92 TDs all-time. Only Peyton Manning and Marvin Harrison have more (114).

14. Note to the Raiders: Doing a better job following COVID-19 protocols seems like a good idea, especially in the days before you're supposed to face Brady and Co.

15. Time to punch Pittsburgh's Super Bowl ticket? Sunday's meeting between the Steelers and Titans was only the fifth time in league history two undefeated teams met in Week 7 or later (strike seasons excluded). In the previous four instances, the winner wound up playing for the Lombardi Trophy.

17. Pittsburgh receivers coach Ike Hilliard told me a lot of good things about Steelers rookie WR Chase Claypool last week. (The blossoming Canadian star had one catch for -2 yards Sunday.) But Hilliard also expressed the joy he's had coaching the team's other wideouts – all of them, Claypool included, drafted after the first round. JuJu Smith-Schuster and Diontae Johnson combined for 18 catches, 165 yards and two scores as Pittsburgh improved to 6-0.

18. Good reminder to Titans fans that, as much as Stephen Gostkowski giveth, he'll also taketh away here in the late stages of his career.

19. It seems sacrilegious, but I should be starting Justin Herbert instead of Aaron Rodgers on my fantasy team – even on days when A-Rod throws for four TDs.

19a. Herbert finally picked up his first victory after coming up short against the likes of Patrick Mahomes, Brady and Drew Brees.

20. Congratulations to the NFC East, which went a collective 2-2 this week … but only because its four members were locked into intradivisional matchups. The Eagles, now 2-4-1, own a half-game lead on Washington and Dallas.

20a. And yet, this is the first time in league history that no one in a given division has three wins through seven weeks in a non-strike season.

20b. (Genuine) congratulations to the NFC West, all four of its members over .500 after the 49ers buried the Patriots in New England.

Those divisions’ champs (’84 DEN, ’05 NYG, ’16 DAL) lost their 1st playoff gm & none of those divisions had a team get past the Divisional Rd

21. Did no one tell Texans defenders they should cover and double-cover and triple-cover Packers WR Davante Adams, who had 13 grabs Sunday for 196 yards and two scores? It's not like Houston even had to worry about deactivated Green Bay RB Aaron Jones …

22. Though the Browns swept the Bengals in two tight games this season, decent potential that the Battle of Ohio becomes one worth watching closely in future seasons if No. 1 overall draft picks Baker Mayfield and Joe Burrow are going to put on these kind of shows.

22a. Mayfield and Burrow combined to throw five go-ahead TD passes in the fourth quarter – a league record – of Cleveland's 37-34 victory. 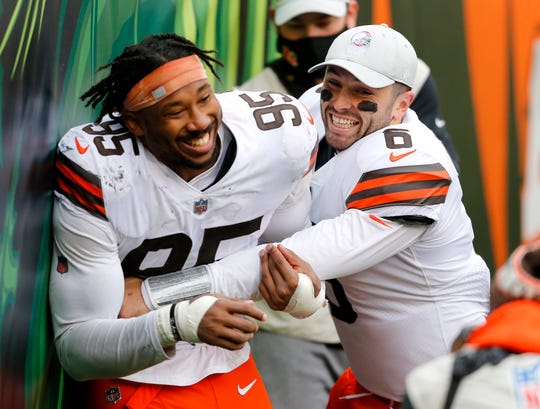 23. Still premature to give defensive player of the year hardware to Cleveland DE Myles Garrett, but he's only picking up steam. Garrett, who has now forced four fumbles, leads the league with nine sacks and has notched at least one in six straight games, a club record. Maintain this current pace, and Michael Strahan's 19-year-old single-season record (22½) could be in jeopardy.

24. Sunday was "National Tight Ends Day," but we should all get Monday off in order to properly observe the feats of George Kittle, Gronkowski and the Browns, whose TEs scored three times in Cincinnati.

You know what day it is. #NationalTightEndsDaypic.twitter.com/PHBiXeLNKl

25. The Saints began Sunday ranked fourth in the NFL with a 48.5% conversion rate on third down. Against the Panthers, they went 12-for-14. Victory. Michael Thomas? Emmanuel Sanders? Who needs 'em?

25a. And yet, the Chiefs went 0-for-8 on third down in Denver … and beat the Broncos 43-16. Just goes to show that sometimes these key metrics are about as reliable as, welp, win probability.

26. The 102-yard kickoff return by Kansas City's Byron Pringle was the longest play in the NFL this season.

27. Panthers K Joey Slye just missed converting a record-long 65-yard field goal, which would have tied Carolina and New Orleans inside of two minutes. Maybe Tom Dempsey's ghost helped knock it down just enough. Dempsey, a former Saint who once owned the league record with a 63-yarder he drilled to beat the Lions in 1970, died earlier this year.

28. Hard to believe the Bills couldn't muster a single touchdown against the winless Jets. Fortunately for Buffalo, eight of its 10 drives ended with rookie K Tyler Bass attempting a field goal – six of his tries successful.

29. After collecting at least five receptions in each of his first six NFL games, Cowboys rookie WR CeeDee Lamb was shut out Sunday.

30. Dallas has trailed by at least 10 points in six consecutive games for the first time in 59 years.

31. Washington LB Jon Bostic's hit that knocked Cowboys QB Andy Dalton out of Sunday's game was one of the most egregious we've seen in recent seasons. Bostic was deservedly ejected while Dalton was assessed for a concussion. Here's hoping for a nice, fat fine for Bostic, an eighth-year vet who should know better.

Jeez, this is a nasty hit by Jon Bostic on Andy Dalton. Bostic ejected. pic.twitter.com/9MkYbJY1WO

31a. Worse still, no Cowboys came to Dalton's defense after he absorbed the dirty blow. Little surprise Dallas looks cooked … even in a division as bad as this.

Tags: 32, From, learned, things, We, Week
You may also like
Latest Posts