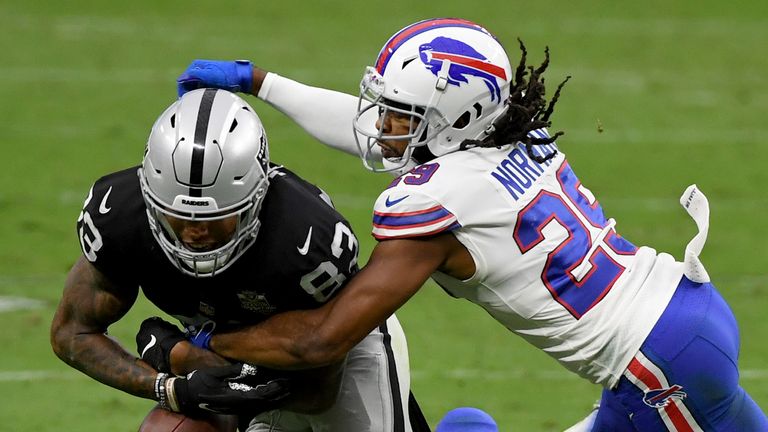 Cornerback Josh Norman harnessed the mentality and skill set of two NFL legends as he produced a decisive play to help the Buffalo Bills towards victory against the Las Vegas Raiders on Sunday.

The veteran, who signed with the Bills in March this year, halted a promising Raiders drive early in the fourth quarter when he punched the ball loose from the clutches of tight end Darren Waller on a second-and-11 completion, before dragging himself to the ball and completing the turnover.

Buffalo were able to extend their lead to 30-16 on the ensuring series thanks to a two-yard touchdown run from Devin Singletary before seeing out the win to move to 4-0.

“The guys really invited me to the party,” said Norman after the game. “They was having a pizza party and ‘I was like I’m knocking on the door, you’re not going to let me in?’, so I had to kick it down. It was fun. “Going through that play earlier on Waller, I came over on him and tried to get it the first time and he just shrugged me off like a big six-foot-six guy would do if you don’t wrap up. And I was actually going for the ball then but his momentum pushed him forward and I slipped off of him.

“I was able to see him in a flat again and somebody was there to tackle him and I know he always likes to get extra yardage so when I came in I just went for it with my left hand and it popped. The execution was reminiscent of the ‘Peanut Punch’ made famous by retired NFL cornerback Charles Tillman and his ability to strip the ball from offensive players.

Norman played with Tillman during their time together with the Carolina Panthers in 2015, evidently learning a trick or two from his former team-mate.

“My competitive drive was ‘I’m going to beat that guy out, his very own technique I’m going to steal it and put it in my arsenal’. If I can’t get you in the air, I’m going to get you on the ground.

“So the mentality was always when somebody is running with the ball I would go for it and I would strike it because I saw him do it and it was just like ‘okay, that’s how he’s going to do it’. I always kept it with me.

“That mindset of getting the ball wherever it is just enhanced me. Just a guy like that pushing me and being motivated to do something in that area. He’s a dawg.” 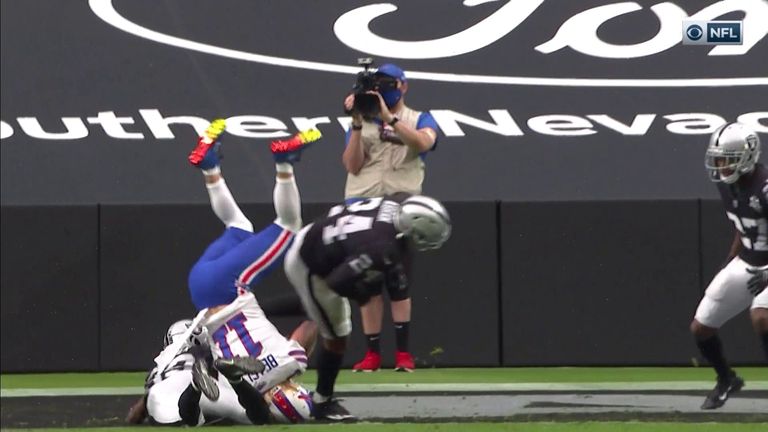 Norman was making his first appearance of the season on Sunday having spent the opening three weeks on injured reserve due to a hamstring problem suffered two days before the first game of the campaign.

Though physically unable to contribute to the team, the 32-year-old insisted his mental inclusion never wavered despite the challenges of being restricted to the press box.

“I had a rough start,” he said. “I was a little rusty at first, I didn’t think I would be but I definitely was and I was just getting my feet back under me and settling in. “I actually got like ‘when this opportunity comes, I’m going to make the best of it’. I’m super glad to be back out there with these guys, I don’t think there’s a better ball group than this team.”