It might have been a quiet few weeks for Jacksonville Jaguars tight ends not named Tim Tebow. But beneath the frenzy surrounding the former NFL quarterback’s divisive comeback looms one of the team’s most pressing position battles.

The Jaguars elected not to bring back veteran Tyler Eifert this offseason after he managed 36 catches for 349 yards and two touchdowns in 2020, and traded 2019 third-round selection Josh Oliver to the Baltimore Ravens in exchange for a conditional 2022 seventh-round pick.

Head coach Urban Meyer subsequently reunited with his former Florida play-caller Tebow, whose return to the league arrived nine years on from his last appearance in 2012 – at which time No. 1 overall pick Trevor Lawrence was just 12-years-old. Jaguars senior reporter J.P. Shadrick suspects there could yet be more change in the position group.

“I’m still curious with the tight end position, that’s the one glaring question mark on offense,” Shadrick told Sky Sports. “James O’Shaughnessy has been in the league seven years but only has 88 career catches. He’s your most experienced tight end option right now, I think they’d like to add to that at some point.

“We have all heard the Tebow name, how much does that fit into the equation, I think the next three weeks will be key for that, we’ll see if he can keep up. And then they’ll put the pads on and get a little more physical in training camp.

“They have added Chris Manhertz who is a veteran free agency addition and he’s a run blocking option, but they need a pass-catching consistent weapon, I think that’s something still to think about.” 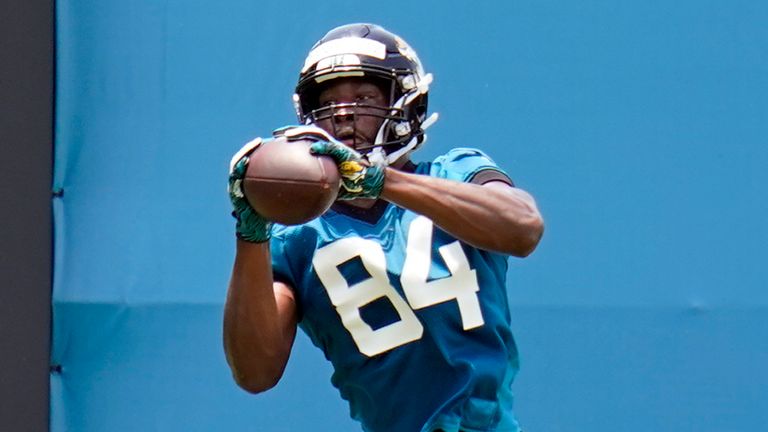 Eifert and former Indianapolis Colts Trey Burton remain among the free agency options, while the Philadelphia Eagles’ Zach Ertz continues to be linked with a trade away from the Super Bowl LII champions.

Criticism of Tebow’s arrival has pointed towards an unearned opportunity being taken from younger players fighting to make their way in the league, particularly after zero HBCU prospects were drafted for the ninth time since 2000.

Shadrick believes training camp could serve as a defining insight into what the future holds for the 33-year-old’s comeback.

“As for what the locker room thinks of it, I think if he can keep up and play and help contribute to the team, no issues; if he can’t and is still around, that’s an issue,” he said. “I don’t think we’re there yet, it’s so early into it.

“I just think there are bigger pressing stories for the Jaguars, how does Trevor figure out the offense? How does (Travis) Etienne work into it with all these other weapons? But I get why the storyline is Tim Tebow. I just don’t know how long that will be, because in reality he is a fourth tight end option or a H-back or specialty type player, but you pull that name out and people react one way or another. Jaguars offseason 2021.

“Apparently he’s in unbelievable shape, but is that football shape? Can he run routes? Is he crisp enough? Can he do all that? We’ll find that out. If he can then okay you graduate to training camp and get in the physical aspect of tight end play or whatever role they envision for him. Can he keep up there? That for me is the big question. Get your popcorn ready in July because that will be a show to watch.”

Tebow moved to Jacksonville at the age of three and attended Nease High School before winning a Heisman Trophy and two National Championship titles under the tutelage of Meyer at Florida until he left for the NFL as a first-round pick for the Denver Broncos in 2010.

He went 8-6 as a starter over his two seasons in Denver and was eventually replaced by Peyton Manning, after which he spent time with the New York Jets (2012) following by offseason spells at the New England Patriots (2013) and Philadelphia Eagles (2015). Tebow has since plied his trade in minor league baseball, announcing his retirement in February 2021.

“The connection is why he is here, let’s make that clear,” added Shadrick. “That connection with Urban Meyer gave him an opportunity.

“This is the time of year to give guys a shot and it happens a lot of different ways in the league, a former basketball player can come in off the couch and try out at tight end, those guys have some success in the past. A track star, can this guy run as a wide receiver?

“This is the time of year to try that. For me I get it, okay there’s a history, some may deem it unfair but everybody gets a chance somehow and if that’s Tebow’s chance, okay.”