Aaron Rodgers threw for 296 yards and two touchdowns as well as running in another as the Green Bay Packers dominated the NFL’s No 1 ranked defense to beat the Los Angeles Rams 32-18 in front of 9,000 fans at Lambeau Field and secure their spot in the NFC Championship game.

The Packers pulled away for good on a 58-yard touchdown from Allen Lazard with just under seven minutes to play after a Kenny Clark sack had halted the Rams in their bid to tie the game following Cam Akers’ third quarter touchdown run and two-point conversion that had made it 25-18.

An outstanding effort from the Packers’ offensive line had nullified the Rams defense and a banged up Aaron Donald for much of the game, while paving the way for a defining committee backfield effort from Aaron Jones, Jamaal Williams and AJ Dillon that helped the hosts build a 19-10 first-half lead.

In a contrast on the season, it was the Rams offense leading the fight for Sean McVay as Jared Goff, only recently back from thumb surgery, benefited in an up-tempo approach that helped them stay in the game on Van Jefferson’s second quarter touchdown to make it 16-10 and Akers’ score after the break.

The victory means Rodgers will now meet either the Tom Brady or Drew Brees in the playoffs for the first time ever, with the Tampa Bay Buccaneers and New Orleans Saints set to face off in Sunday night’s final Divisional Round clash. The Packers were held to a 24-yard field from Mason Crosby on their opening drive of the game, before the Rams responded through Matt Gay’s 27-yard kick having squandered a decision to go for it on fourth-and-one from the 14 with a sloppy false start penalty.

Davante Adams’ eagerly-anticipated matchup with Jalen Ramsey moved into the spotlight when the Packers wide receiver escaped the cornerback across the goalline to haul in a bullet from Rodgers for a one-yard touchdown. It capped a 14-play, eight minute drive during which the Packers ran the ball eight times behind an exceptional offensive line, as well as being assisted by a needless personal foul against Donald.

Za’Darius Smith sacked Goff for a loss of seven to derail the Rams’ response, from which Rodgers launched another patient nine-play drive behind dominant pass protection that he capped with a one-yard touchdown run after fooling Leonard Floyd with the pump-fake on third-and-goal. Goff hit back with a four-yard touchdown pass to Jefferson at a crucial time to reward an impressive up-tempo drive during which rookie Akers ran the ball five times.

Rodgers was then fortunate to avoid being intercepted by Troy Hill while targeting Lazard late in the half, and then again by Josh Johnson straight after on a pass intended for Marquez Valdes-Scantling, the Packers settling for a 39-yard Crosby field goal to make it 19-10. Jones opened up the second half with a blistering 60-yard run and was at hand to finish the drive from one-yard out, the Packers, however, were unable to convert the two-point attempt.

The Rams followed up Darious Williams’ excellent coverage to break-up a deep-ball intended for Valdes-Scantling by cutting the lead to 25-18 on a tackle-breaking seven-yard run from Akers, who was then on hand to accept the trick-play flip from Jefferson for the two-point conversion. 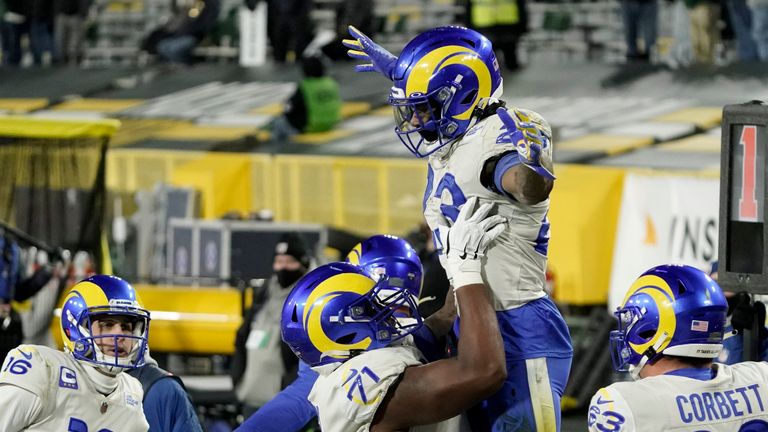 After stopping the Packers for the second straight drive, the Rams were unable to capitalise as a Clark sack left them facing a drive-stalling third-and-16 with 10 minutes to play in the fourth quarter.

The hosts went ahead and tightened their grip on the game when Rodgers connected with Lazard for a 58-yard catch-and-run to the house with 6.52 to play, before a combined sack from Rashan Gary and Clark on fourth-and-16 on the Rams’ next drive all-but sealed the win.