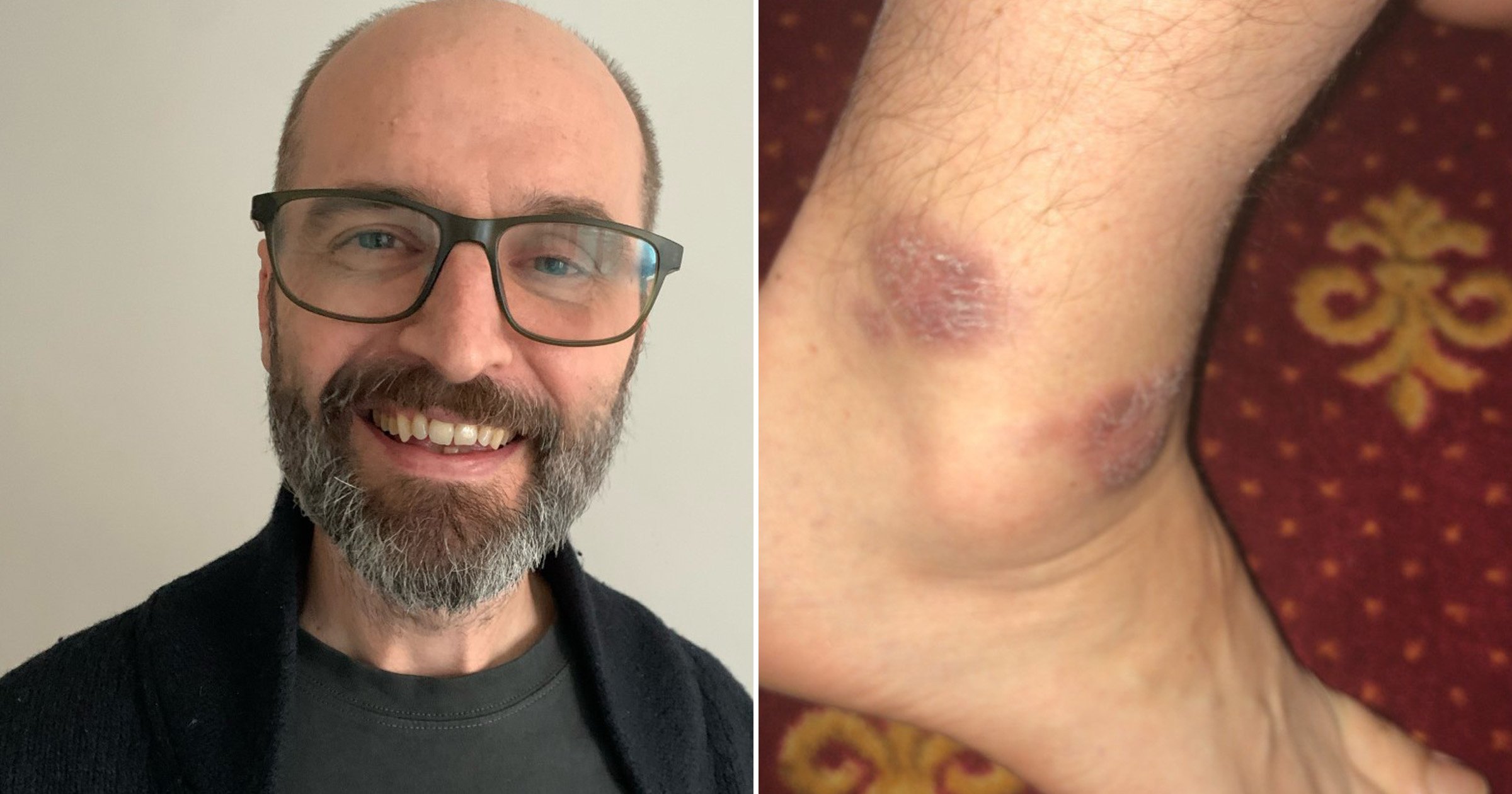 When Josh Western went to the doctors with an unusual rash on his ankle in December 2017, professionals had no idea what his condition was.

‘It all started on my right ankle, it was like a rash that wouldn’t heal,’ the 44-year-old special effects makeup artist tells Metro.co.uk.

‘I was going to the gym a lot and I thought it was a sweat rash, as it was around my shoe-line.’

After being referred to Watford General dermatology department and receiving further tests, Josh was diagnosed with aggressive cutaneous T-cell lymphoma – a rare type of cancer that begins in white blood cells.

‘Although it’s on my skin, it’s a cell-based type of blood cancer.

‘I had never come across it, and then obviously when you get told about it, you Google search it and it gets a bit scary.’

Josh was then sent to Guy’s Hospital to see a specialist in the field, who said he would need six rounds of CHOP chemotherapy – which is a chemo combination that’s used to treat non-Hodgkin lymphoma.

‘The chemo just knocks you for six, I couldn’t walk up the stairs in my house, without being out of breath. I remember trying to open a bottle of ketchup and I just physically couldn’t undo the lid,’ he adds.

The chemotherapy was all going to plan – until the fifth round had taken place.

Josh was walking in his garden when his tongue and left cheek went completely numb. A day later this had spread around his face so he was rushed into hospital.

‘It turned out that it had spread and mutated and travelled through my bloodstream up my spine and into my cerebral cortex, in the brain,’ he explains.

MRIs and a biopsy soon revealed that Josh also had central nervous system (CNS) lymphoma – which is incredibly rare.

‘When they say “rare” that’s something you don’t ever want to hear, especially from a professional who has been doing it for 40 years,’ Josh continues.

‘With the CNS lymphoma, there’s only four other people in the world who had that mutation that the doctor knew about, and all of them had died within weeks.’

Josh was told he would need four rounds of aggressive intrinsic methotrexate chemotherapy.

‘You can only ever have four sessions of it in a lifetime, otherwise it can kill you or do severe damage to the rest of your body and your cells,’ he says.

After the third cycle, Josh also needed a stem cell transplant. And in the months that followed, he noticed more blotches on his back, which required radiotherapy.

He adds: ‘Radiotherapy – compared to everything else – is a walk in the park, that didn’t really affect me at all.

‘I was working in London on a film anyway, so I could nip in and out of shooting and nip off to Guy’s and have this two minute treatment and go back to work.’

Since then, Josh has had to monitor the blotches that keep appearing and disappearing on his skin and report them to his doctors.

He adds: ‘You can’t recover from the T-cell lymphoma, once you’ve got it you’ve got it. It’s just something you’ve got to keep on top of. And if anything does look a bit untoward, then I’d give them a call and they will book me into radiotherapy.

‘I can’t have any more chemo, I’ve had enough and too much. So it’s just radiotherapy really and there might be a chance of a stem cell transplant – but I hope not, as that was a hideous procedure.

‘I think these blotches are coming and going because my immune system is fighting it. I don’t exactly know the science behind it – I don’t think they really know why they come and go.

However, Josh is still left with side effects from such intense treatments, including numbness on the left side of his face and painful cramps in his legs.

‘Although chemo does kill the cancer it does knock everything else and I think this is why I’ve got all these other issues with my legs,’ he stresses.

‘I’ve got these flutters and, if you were to look at them, the muscles have a mind of their own.

‘Sometimes when I’m lying in bed, they will flutter so much – you know that feeling of cramp – which can be excruciating.

‘I get it in my feet as well quite a lot, my foot curls up and feels like it’s going to snap.

‘Also my left cheek is still numb and it won’t ever heal, because the sheath tumour just destroyed my nerves – which has now created more nerve issues.’

Following a gruelling 15 months off work, Josh is now back as a special effects makeup artist travelling to locations around the world – but adds that it can be difficult waiting to see if anything returns on his skin.

‘I have my days of being a bit down, but you’ve got to take it day-by-day and just move on,’ he says.

‘The doctors aren’t worried and that does make it a bit better.’

There was also another positive thing to come out of Josh’s emotional journey – his daughter.

Josh adds: ‘A week before starting CHOP chemotherapy, they advise you to have a sperm collection, because a man becomes sterile when you have chemo – but my wife fell pregnant the week before this took place!’

Now Josh will have check-ups every six months for the foreseeable future.

He continues: ‘People talk about the five year thing with cancer, but when I spoke to my consultant about it, he didn’t seem very taken by that.

‘He said it is in some cases, but in mine it might not be.

‘But I’m absolutely happy with that because there’s really good treatment available and the doctors and NHS have been amazing. So I can’t fault that.’

Get in touch by emailing [email protected]

Tags: cancer, Health
You may also like
Latest Posts