A simple wristband containing biometric monitoring sensors is able to pick up early infection from both influenza and the common cold before symptoms develop. Moreover, it can predict the severity of the illness once it becomes symptomatic, 100 mg methylphenidate new research shows.

“Prior to the development of symptoms, people are still infectious and can potentially infect others,” senior author Jessilyn Dunn, PhD, Duke University, Durham, North Carolina, told Medscape Medical News in an email.

“That’s why it’s so important to be able to detect infection even when a person doesn’t feel symptomatic, as this would help prevent the spread of pathogens that occur before somebody knows they are sick — and which is why it is important from a public health perspective,” she added.

The study was published online September 29 in JAMA Network Open. 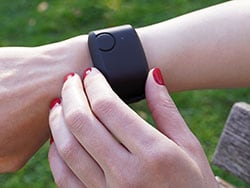 The biosensors contained within the wristband were able to detect the presence or absence of H1N1 infection with an accuracy of 79% within 12 hours after participants had been inoculated and an accuracy of 92% within 24 hours of being inoculated, the authors report. Thus, “we could assess whether or not a participant was infected with H1N1 between 24 and 36 hours before symptom onset,” investigators note.

The median time for symptom onset following the rhinovirus challenge was 36 hours after inoculation. The biosensors predicted the presence or absence of rhinovirus infection with an accuracy of 88%, the authors wrote. And when both viral challenges were combined, models predicting infection had an accuracy of 76% at 24 hours after participants being inoculated.

As the authors point out, the ability to identify individuals during the early critical stage of viral infection could have wide-ranging effects. “In the midst of the global SARS-CoV-2 pandemic, the need for novel approaches like this has never been more apparent,” they suggest.

And in point of fact, in a not-yet-peer reviewed study using a real-time smartwatch-based alerting system again designed to detect aberrant physiologic and activity signals associated with early infection, Stanford investigators found that alerts were generated for presymptomatic and asymptomatic COVID-19 infections in 78% of cases in over 3200 participants tested at a median of 3 days prior to symptom onset.

The authors also noted that their system is scalable to millions of users, thus offering a personal health monitoring system that can operate in real time. Asked to comment on the Dunn et al study, Steven Steinhubl, MD, a research scientist and formerly the director of digital medicine at Scripps Research’s Translational Institute, La Jolla , California, told Medscape Medical News that he personally has a lot of faith in this type of technology .

“Unfortunately, COVID-19 has changed our perspective about respiratory infections but if you think of the bad flu seasons we’ve had in the past, people do die from influenza, so I think there is a lot of value [in this technology], although the degree of value depends on the severity of the infection,” he said.

For example, if people actually ever go back into work together, early recognition that an employee might have influenza or another highly contagious infection could alert them to the necessity to stay home and self-isolate.

“We have a bit to go before we get there,” Steinhubl acknowledged, “but you could have a really big impact on the spread of any infectious disease that would be better for everybody.”

Dunn has disclosed no relevant financial relationships. Steinhubl is chief medical officer at physIQ, a company involved in the development of personalized analytics.

Tags: Health, healthcare technology
You may also like
Latest Posts