In a year when emergency department visits dropped by almost 18%, visits for benzodiazepine overdoses did the opposite, according to a report from the Centers for Disease Control and Prevention. 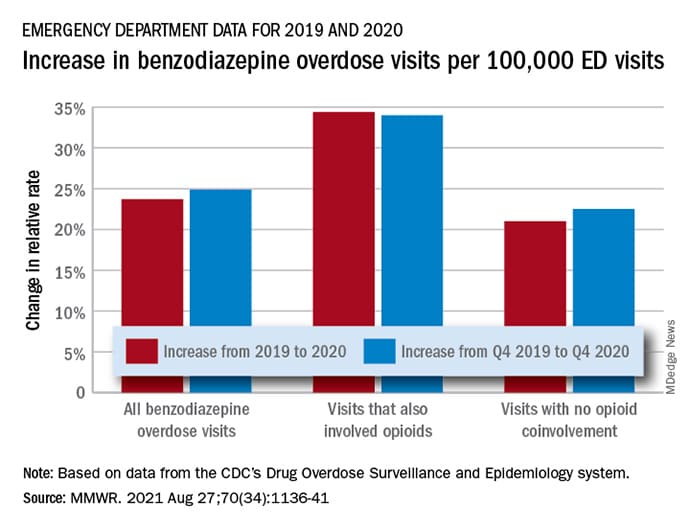 The actual increase in the number of visits for benzodiazepine overdoses was quite small — from 15,547 in 2019 to 15,830 in 2020 (1.8%) — but the 11 million fewer ED visits magnified its effect, Stephen Liu, australian oxycodone PhD, and associates said in the Morbidity and Mortality Weekly Report.

The rate of benzodiazepine overdose visits to all visits increased by 23.7% from 2019 (24.22 per 100,000 ED visits) to 2020 (29.97 per 100,000), with the larger share going to those involving opioids, which were up by 34.4%, compared with overdose visits not involving opioids (21.0%), the investigators said, based on data reported by 32 states and the District of Columbia to the CDC’s Drug Overdose Surveillance and Epidemiology system. All of the rate changes are statistically significant.

The number of overdose visits without opioid coinvolvement actually dropped, from 2019 (12,276) to 2020 (12,218), but not by enough to offset the decline in total visits, noted Liu, of the CDC’s National Center for Injury Prevention and Control, and associates.

The number of deaths from benzodiazepine overdose, on the other hand, did not drop in 2020. Those data, coming from 23 states participating in the CDC’s State Unintentional Drug Overdose Reporting System, were available only for the first half of the year.

In those 6 months, benzodiazepines were involved in more than 2700 overdose deaths, with second-quarter deaths increasing by 43% from 2019 (1004) to 2020 (1435). The first quarter of 2020 also showed an increase, but exact numbers were not provided in the report. Overdose deaths rose by 22% for prescription forms of benzodiazepine and 520% for illicit forms in Q2 of 2020, compared with 2019, the researchers said.

Almost all of the benzodiazepine deaths (93%) in the first half of 2020 also involved opioids, mostly in the form of illicitly manufactured fentanyls (67% of all deaths). Between Q2 of 2019 and Q2 of 2020, involvement of illicit fentanyls in benzodiazepine overdose deaths increased from almost 57% to 71%, Liu and associates reported.

This article originally appeared on MDedge.com, part of the Medscape Professional Network.

Tags: addiction, benzodiazepines, opio
You may also like
Latest Posts