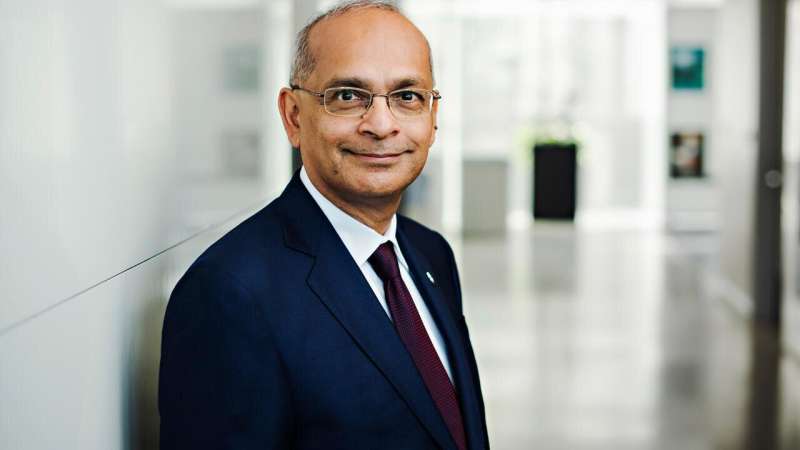 Before becoming the President and Vice-Chancellor of the University of Waterloo last year, Vivek Goel supported Canada’s response to the pandemic as a member of the Federal COVID-19 Immunity Task Force. He also served as scientific advisor for the CanCOVID Network, which is a national network of researchers in the areas of health, science and policy created to promote collaboration on COVID-19 research. As we face omicron, the latest variant of concern, Dr. Goel discusses the ways it has changed the pandemic, its impact on society, and what to do about it.

We hear omicron isn’t as severe or as deadly as previous variants, but there has been explosive growth in hospitalization. Can you help us make sense of that?

And so, when we talk about comparing omicron to the delta variant, or the alpha variant before that, or the original wild-type variant, which was first detected in Wuhan, you can’t just say: “Is it more severe or not?” because it’s comparing all these different characteristics at once. And the evidence is still evolving.

What we do know is that the impact of this particular variant, the omicron variant, is less than the impact of delta at the individual level. But that is in large part because of the prior immunity that our population has. And there is some evidence to suggest that the virulence of the virus—the degree of disease that it causes in people who are infected—is also less than that of the delta variant, the one that just came immediately before. But the amount of that is still being established. There are some people who are saying that the virulence is probably still about the same as the original wild-type variant.

What is different about omicron?

Where the omicron variant clearly has as an advantage is its transmissibility. Each person it infects is going to infect many more people. And again, the numbers vary, but it’s probably about at least two to three times more than delta, and two to three times delta was two to three or more times than alpha. And alpha was more than the original.

So, it’s many times more transmissible than the original virus that we saw back in late 2019, and that spread around the world in the beginning of 2020, and probably causes about the same severity of disease in each person that it infects. If we can think back to the early days, when it was first appearing in Italy or New York, and we saw ICUs being overrun, if we had had this virus back then we would have had total devastation throughout the world because it is many times more transmissible but can still cause severe disease in those that don’t have prior immunity.

The reason we’re talking about it having less severity, or being “mild,” is because since the beginning of 2020, we have started to build up population immunity, and it’s built up in two ways. One, people have become infected with the disease. And we’ve got the vaccines, allowing people to be protected against infection to a certain degree. But more importantly, vaccines have allowed people to be protected from having really bad consequences if they do get infected.

What we’re seeing with omicron is the vaccines are less protective against infection with omicron than they were for delta and the earlier variants. But they still protect against being hospitalized or needing to go into the ICU and go onto a ventilator, and they protect against death. What’s happening right now is we’re seeing a very rapid spread of this particular variant because the prior immunity, either from disease or from the vaccines, does not protect to the same degree against the transmission.

So we’re seeing the cases in vaccinated people, but we’re not seeing vaccinated people being hospitalized at the same rate, or needing intensive care, or having the unfortunate consequence of passing away. That’s why we can wind up with a situation where we’ll have a headline saying, “It’s not as severe, it’s not as deadly.” That’s in large part because of this prior immunity that we’ve built up, especially from vaccines.

What does this all mean on a larger scale?

Even if we believe it is “mild,” it’s still having devastating consequences for us as a society. And that’s because of a couple of things. One, because it is spreading as a disease and even in vaccinated populations, it is spreading to many people all at the same time. That results in a lot of absenteeism, either because people have been infected, or because they’ve been exposed and they’re asked to go into isolation as a result of that.

The other consequence for the health system is that because it’s infecting so many people all at once, there’s still going to be a certain proportion hospitalized. And even if that proportion is very small, a fraction of one percent, when you have millions of people infected at the same time, that very small percentage multiplied by that many people at the same time, results in a lot of people having to go to hospital.

The final thing I’ll just say on this is we still have 10 to 15 percent of people who haven’t been vaccinated or haven’t had their two doses. There’s a certain fraction of those that are children under five, for whom we still don’t have vaccines approved, and the children five to 11, for whom the vaccine was just approved a few months ago, and so they’re still in the process of getting vaccinated.

So, again, omicron spreading into that population is going to result in a higher rate of hospitalization, because even though COVID has been generally milder in children, as it starts to spread so fast, there are just going to be so many children being infected at the same time, we will start to see hospitalizations rise in that population. And then we have adults who have not been fully vaccinated. Unfortunately, what we are seeing in our hospitals right now is the vast majority of people being hospitalized and almost all the people needing to be in intensive care and having to have ventilators are the unvaccinated.

What can members of our community do?