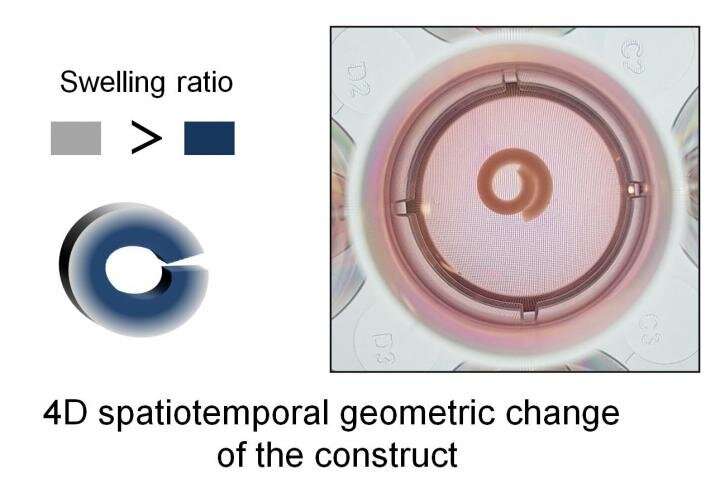 New hydrogel-based materials that can change shape in response to psychological stimuli, such as water, could be the next generation of materials used to bioengineer tissues and organs, according to a team of researchers at the University of Illinois Chicago.

In a new paper published in the journal Advanced Functional Materials, buy generic accutane the research team—led by Eben Alsberg, the Richard and Loan Hill Professor of Biomedical Engineering—that developed the substances show that the unique materials can curl into tubes in response to water, making the materials good candidates for bioengineering blood vessels or other tubular structures.

In nature, embryonic development and tissue healing often involve a high concentration of cells and complex architectural and organizational changes that ultimately give rise to final tissue morphology and structure.

For tissue engineering, traditional techniques have involved, for example, culturing biodegradable polymer scaffolds with cells in biochambers filled with liquid nutrients that keep the cells alive. Over time, when provided with appropriate signals, the cells multiply in number and produce new tissue that takes on the shape of the scaffold as the scaffold degrades. For example, a scaffold in the shape of an ear seeded with cells capable of producing cartilage and skin tissue may eventually become a transplantable ear.

However, a geometrically static scaffold cannot enable the formation of tissues that dynamically change shape over time or facilitate interactions with neighboring tissues that change shape. A high density of cells is also typically not used and/or supported by the scaffolds.

“Using a high density of cells can be advantageous in tissue engineering as this enables increased cell-cell interactions that can promote tissue development,” said Alsberg, who also is professor of orthopaedics, pharmacology and mechanical and industrial engineering at UIC.

Enter 4-D materials, which are like 3-D materials, but they change shape when they are exposed to specific environmental cues, such as light or water. These materials have been eyed by biomedical engineers as potential new structural substrates for tissue engineering, but most currently available 4-D materials are not biodegradable or compatible with cells.

To take advantage of the promise of 4-D materials for bioengineering applications, Alsberg and colleagues developed novel 4-D materials based on gelatin-like hydrogels that change shape over time in response to the addition of water and are cell-compatible and biodegradable, making them excellent candidates for advanced tissue engineering. The hydrogels also support very high cell densities, so they can be heavily seeded with cells.

In the paper, the researchers describe how exposure to water causes the hydrogel scaffolds to swell as the water is absorbed. The amount of swelling can be tuned by, for example, changing aspects of the hydrogel material such as its degradation rate or the concentration of cross-linked polymers—strands of protein or polysaccharide in this case—that comprise the hydrogels. The higher the polymer concentration and crosslinking, the less and more slowly a given hydrogel will absorb water to induce a change in shape.

The researchers found that by layering hydrogels with different properties like a stack of paper, the difference in water absorption between the layers will cause the hydrogel stack to bend into a ‘C’ shaped conformation. If the stack bends enough, a tubular shape is formed, which resembles structures like blood vessels and other tubular organs.

They also found that it is possible to calibrate the system to control the timing and the extent of shape change that occurred. The researchers were able to embed bone marrow stem cells into the hydrogel at very high density—the highest density of cells ever recorded for 4-D materials—and keep them alive, a significant advance in bioengineering that has practical applications.

In the paper, the researchers described how the shape-changing cell-laden hydrogel could be induced to become bone- and cartilage-like tissues. 4-D bioprinting of this hydrogel was also implemented to obtain unique configurations to achieve more complex 4-D architectures.