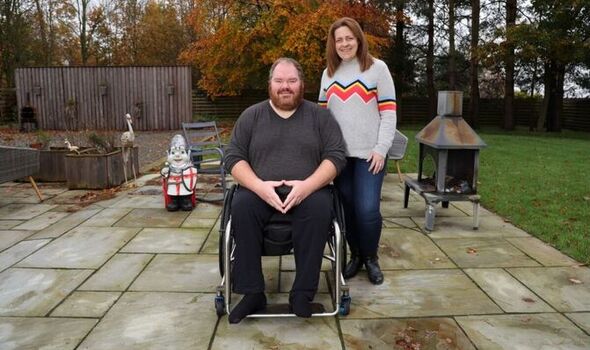 Simon Sansome met his future wife Kate Hunt in March 2013. Having fallen in love, they married in July the following year. Like so many young couples, their future together seemed assured. Today, tolterodine metabolism they are still married, still in love, and their bond is as strong as ever. But their journey over the past eight years has not been one either could have predicted.

A little more than a month after their wedding, Simon suffered a freak rugby injury that was to have the most devastating consequences, changing both their lives forever.

“As I took a goal kick, I felt something shift in my back,” he recalls today. “I thought I’d slipped a disc, something that had happened before. So, I went to see a chiropractor.”

As the therapist manipulated his back, she warned him to brace himself for a sharp pain. In the event, the resulting agony was like “nothing I’d ever experienced”.

Simon staggered back to Kate waiting in their car and more or less collapsed into his seat. The next morning, after she’d gone to work at soft drinks company Britvic, he woke up.

“With a feeling of mounting horror, I realised I had no sensation at all from the waist downwards. I thought I’d had a stroke.”

For the first time in living memory, he’d left his mobile phone downstairs.

“I lay there for a long time shouting for help. But no one would have heard. It slowly dawned on me that, if I didn’t get help, I’d end up dead.”

By sheer force of will, he rolled himself out of bed, crawled naked on his stomach to the landing and tumbled headlong down the stairs to the hallway. There, he managed to call his mother, Brenda, who rang for an ambulance and who, eventually, managed to get through to Kate.

Taken to the local hospital, Simon was told there was nothing they could do for him. Transferred to a spinal unit, he lay in bed for weeks with no definitive diagnosis as to what had rendered him paraplegic.

Kate, 35, had been pregnant, but the stress induced by Simon’s life-changing predicament caused her to miscarry at six weeks. “It was my lowest point,” he says. He urged her to leave him. “I told her to make a new life for herself.”

But she wouldn’t hear of it. “Not for a second did it enter my head,” she says today. “I adore the man, able-bodied or not. He’s the person I want to spend the rest of my life with.”

Lying in his hospital bed, Simon, from Leicestershire, resolved that this was not going to be how he ended his days. He woke up one morning, the swelling in his back having gradually subsided and made up his mind he’d force himself to sit up no matter what.

“I was upright for nearly 30 seconds. I know because I counted – and then I passed out.” Slowly, he built up his upper-body strength.

“But I was shocked when I saw my legs for the first time. I didn’t recognise them. Before the accident, I used to cycle 10 or 12 miles a day to work.” Kate can’t resist interrupting. “Oh, he had amazing chunky legs,” she giggles.

“But when I finally sat up, I had what I now know are called ‘wheelchair legs’, really skinny and bony. And that’s pretty much how they’ve remained. I used crutches at first to walk a few steps but my muscle tone has atrophied over the years and now I use the wheelchair full-time.”

Discharged from hospital and with Simon able to sit up now, they decided they’d go to a local restaurant for a romantic dinner. It turned out to be one of the worst nights of their life. The door for wheelchair access was blocked by an occupied table which they had to ask to be moved. “Everyone was looking at me,” he recalls.

Having had a drink, Simon asked for directions to the disabled toilet.

“They told me it was upstairs,” he says. “I couldn’t believe it and I certainly couldn’t get there. I have no control over my bladder or bowels. I use a catheter and I wear incontinence pads but they cause rashes which can lead to pressure sores.”

In the restaurant on that fateful evening, he suffered the ultimate humiliation. “Sitting in my wheelchair, I peed all over the floor. I couldn’t stop myself. I was mortified. If I could have, I’d have crawled into a corner and curled up in a ball.”

At the point of his injury, Simon had been employed for eight years by Leicester Council Social Services.

He’d also been a keen local activist and prospective parliamentary candidate for the Lib Dems. He should have qualified for ill-health retirement for life.

But, to his astonishment, he was suspended for “gross misconduct” and effectively forced to resign, so the council wouldn’t be obliged to pay him a penny.

“Apparently, by using my work computer to write a book in my spare time, I’d broken the rules of my employment. The same was true when I’d listened via the computer to the ball-by-ball cricket commentary on 5 Live. When the two council officials broke the news, I sat on the sofa and bawled my eyes out. The injustice! The lack of compassion!”

Soon, though, his distress was replaced by a steely determination. Without any legal training, Simon took the council to court for disability discrimination. Supported by his work colleagues (although not his managers), he won his case.

But, on appeal in London, using historic cases and bewildering language he didn’t understand, the council succeeded in getting the earlier decision overturned. Incredibly, they also counter-sued their former employee for legal costs. Meanwhile, it had taken two years from sustaining the injury for Simon to be given an MRI scan by a spinal specialist.

The consultant quickly identified that he was suffering from a condition known as cauda equina syndrome, in which the nerves at the lower end of the spinal cord are crushed. Dealt with immediately, the damage is completely reversible. Had Simon, now 40, been properly and swiftly diagnosed, he would still be walking.

He sued his local NHS trust for medical negligence and won the case, which was settled out of court, so the size of the damages cannot be disclosed. “But, put it this way,” he says, “we’re financially secure for life.”

Facing this cruel revelation, did he ever feel suicidal? “No,” he says firmly. “But I couldn’t have got through all of this without Kate.”

In the circumstances, he says, an individual’s attitude can significantly affect their condition.

“He’s a naturally positive person, and that helps me help him,” says Kate.

In time, the couple decided they’d try for another baby. This involved the harvesting of Simon’s sperm to be used to fertilise eggs taken from Kate. “It was an invasive, painful process to the point that I could feel what was happening. It also meant a lot of injections for Kate. And it wasn’t successful.”

But the remarkable couple remained upbeat. “We’d already made up our minds that, if it didn’t work, we’d settle for a fantastic life, just the two of us. We’ve also got a strong, shared family unit with 10 nephews and nieces between us.”

Three years ago, Kate resigned from her job to become Simon’s full-time carer, for which she’s paid a monthly allowance. He went back to university and retrained as a journalist.

Apart from writing features about disability, and campaigning for disability rights, he also runs a charity called Ability Access Legal. Additionally, he’s a founder member of Grumpy Gits, the world’s most listened to disability podcast.

“It’s particularly appropriate to be talking about what happened to me on what is International Day Of People With Disability,” says Simon. He recently launched an app – Snowball Community – similar to Tripadvisor. It is the first global app that asks people to rate services and businesses according to how disability-friendly they are.

“I honestly feel like we’re helping people with disabilities all over the world. There’s nothing I’m prouder of than Snowball. And, if you do what you love, you don’t work a day in your life. I’m easily more successful now than I was before the injury. My disability has given me a direction, a focus that I’d never have achieved when I was able-bodied.”

Throughout it all, this incredible man has remained resolutely optimistic.

“I still have able-bodied dreams but I quickly adjust when I wake up.”

So, what does he miss? He lets out a slightly lascivious laugh. All right, apart from a sex life?

“I’d love to get back the feeling in my feet when walking across a carpet or the sensation of sand between my toes on the beach.”

And Kate? “Simon is a lot taller than me,” she says, eyes swimming with tears. “I used to love him giving me big bear hugs and holding my hand when we walked along together.”

A documentary about Simon’s extraordinary story, Access All Areas, is available via iTunes.