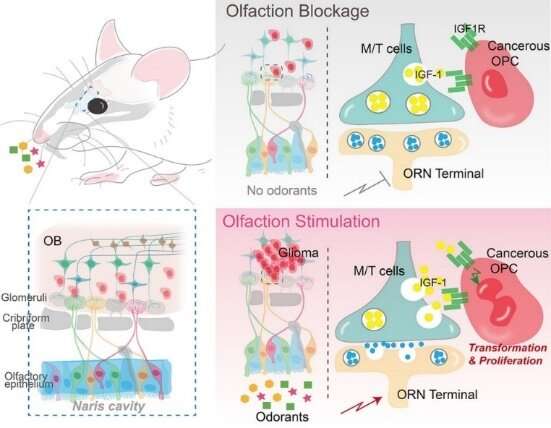 How tumors emerge has always been quite a conundrum in the scientific community.

With unremitting efforts over more than six years, the research team led by Prof. Liu Chong at the Zhejiang University School of Brain Science and Brain Medicine, the Second Affiliated Hospital, Zhejiang University School of Medicine, and Laingzhu laboratory, demonstrated for the first time a unique causal relationship between olfactory sensory experience and gliomagenesis.

Their research findings were published in Nature on May 11.

High-grade glioma is the most common malignant primary intracranial tumor with an annual incidence of about 3 to 8 among 100,000 people. The median survival period is little more than 15 months from disease diagnosis to death. Patients need to undergo a series of therapies, such as surgery, radiotherapy and immunotherapy. It is believed that both genetic risk factors and carcinogenic factors contribute to glioma formation. However, the relationship between environmental stimuli and glioma remains unknown.

Prof. Liu has been wondering what may act as a trigger for glioma. “The growth of tumor cells communicates with the surrounding cells, omeprazole irreversible and transmits relevant information. Neurons are the basic unit of the brain and they function via neural circuit. Therefore, we focus on neuronal activity to explore whether it affects gliomagenesis,” said Prof. Liu.

To unravel the relationship between environmental stimuli and gliomagenesis, researchers should first and foremost construct an autochthonous mouse genetic model to recapitulate adult gliomagenesis originating in, for example, oligodendrocyte precursor cells (OPCs). Rigorous analyses showed that in this mouse model, glioma originated mainly from the olfactory bulb (OB)—the area of information transmission between olfactory receptor neurons (ORNs) and mitral and tufted (M/T) cells.

“Now that glioma preferentially emerges in the OB, will neuronal activity in the olfactory circuit affect the emergence of glioma?” the researchers wondered. This “mind-blowing” flash of inspiration became a turning point in this study. The research team attested to this hypothesis through a series of experiments.

To further verify this conclusion, the researchers suppressed olfactory inputs through naris occlusion by using small plugs. They found that with naris occlusion, tumors were significantly hindered in the olfactory bulb, indicating that olfactory stimuli could regulate gliomagenesis.

Insulin-like growth factor 1 (IGF1) plays important roles in normal olfactory behavior in mice, and its expression and/or secretion in neurons has been suggested to be activity-dependent. Prof. Liu and his team built an innovative mouse model that can induce gliomagenesis and simultaneously knock out IGF1 specifically in M/T cells. The results clearly demonstrated that knockout of IGF-1 in M/T cells resulted in a remarkable reduction in tumor volume. In subsequent experiments, they simultaneously activated olfactory sensory neurons and blocked IGF1 signaling pathways; and found that the pro-tumoral effects induced by olfactory activation were completely abolished. This is the key solid evidence to demonstrate that olfactory activity regulates gliomagenesis principally through IGF1 signaling pathways.

“In the whole process of gliomagenesis, IGF1, released by M/T cells due to olfactory stimuli, is equivalent to the growth signals from the radio wave transmitter tower. Just as an electric wave is received by an antenna, this signal is received by the IGF1 receptor and transmitted to tumor cells, thereby initiating cell malignancy and proliferation,” said Prof. Liu.