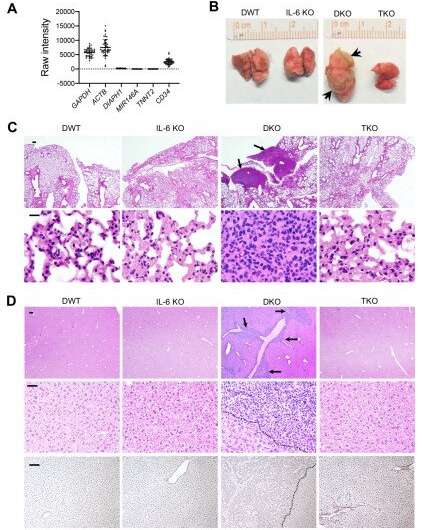 An inflammatory signaling protein called interleukin-6 has been linked to the progression of acute myeloid leukemia, representing a potential target for future treatments of the disease, according to a recent Northwestern Medicine study published in the Journal of Clinical Investigation.

Myelodysplastic syndromes (MDS) are aging-related disorders in which the body produces blood cells ineffectively, which carries the risk of progression to acute myeloid leukemia. While the increased risk of leukemia from MDS has been well-established, the exact mechanisms behind the progression, especially in relationship to aging, have been poorly understood.

“We are surprised to find that IL-6, among many other inflammatory signaling proteins, plays an essential role in MDS to AML progression during aging” said Peng Ji, MD, Ph.D., GME, associate professor of Pathology in the Divisions of Experimental Pathology and Hematopathology, was the senior author of the study.

In the current study, the authors investigated mice that had been engineering to develop a condition that closely mimics MDS. Observing the progression of disease, the scientists found that as the mice with MDS aged, they progressed to acute myeloid leukemia, and furthermore, a signaling protein known as interleukin-6 (IL-6) played a pivotal role in that progression.

Noting that the presence of IL-6 was strongly increased in the mice with MDS, the authors investigated what happened when IL-6 was also genetically removed from the mice. They found that the progression of MDS to leukemia was significantly reduced.

Based on the findings in mice, the authors investigated the bone marrow of human patients with MDS, and found that expression of two types of receptors for IL-6 were notably increased in high-risk MDS patients, but not in patients with a lower risk of progressing to acute myeloid leukemia.

The authors then used cells derived from patients with MDS, and treated them with tocilizumab, a monoclonal antibody against one of the IL-6 receptors which is used clinically to treat rheumatoid arthritis. After treatment, the cells showed reduced cell proliferation and clonogenicity—the propensity for a cell to clone itself and grow into a colony of similar cells.

The findings taken together, according to the authors, suggest targeting the IL-6 signaling pathway is a promising strategy to prevent the progression of MDS in human patients to acute myeloid leukemia.