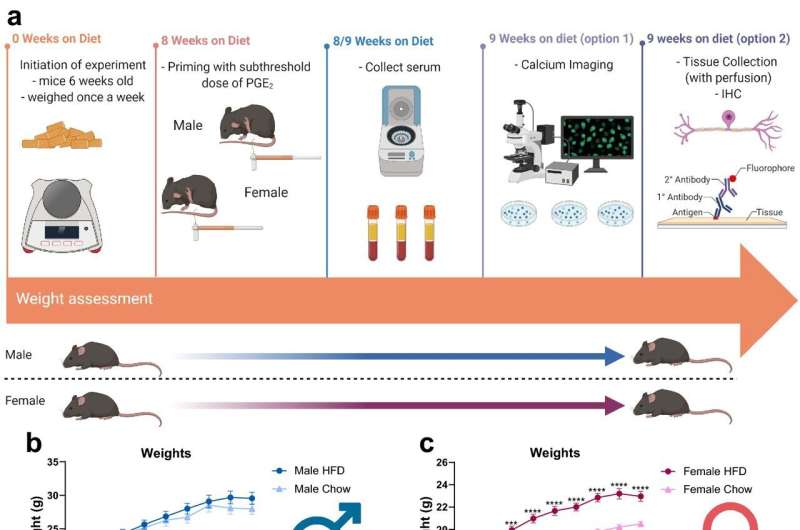 A new study in mice from researchers at The University of Texas at Dallas suggests that a short-term exposure to a high-fat diet may be linked to pain sensations even in the absence of a prior injury or a pre-existing condition like obesity or diabetes.

The study, published Sept. 1 in the journal Scientific Reports, compared the effects of eight weeks of different diets on two cohorts of mice. One group received normal chow, while the other was fed a high-fat diet in a way that did not precipitate the development of obesity or high blood sugar, both of which are conditions that can result in diabetic neuropathy and other types of pain.

The researchers found that the high-fat diet induced hyperalgesic priming—a neurological change that represents the transition from acute to chronic pain—and allodynia, which is pain resulting from stimuli that do not normally provoke pain.

“This study indicates you don’t need obesity to trigger pain; you don’t need diabetes; you don’t need a pathology or injury at all,” said Dr. Michael Burton, assistant professor of neuroscience in the School of Behavioral and Brain Sciences and corresponding author of the article. “Eating a high-fat diet for a short period of time is enough—a diet similar to what almost all of us in the U.S. eat at some point.”

“It became clear, surprisingly, that you don’t need an underlying pathology or obesity. You just needed the diet,” Burton said. “This is the first study to demonstrate the influential role of a short exposure to a high-fat diet to allodynia or chronic pain.”

Western diets are rich in fats—in particular saturated fats, which have proved to be responsible for an epidemic of obesity, diabetes and associated conditions. Individuals who consume high amounts of saturated fats—like butter, cheese and red meat—have high amounts of free fatty acids circulating in their bloodstream that in turn induce systemic inflammation.

Recently, scientists have shown that these high-fat diets also increase existing mechanical pain sensitivity in the absence of obesity, and that they can aggravate preexisting conditions or hinder recovery from injury. No studies, however, have clarified how high-fat diets alone can be a sensitizing factor in inducing pain from non-painful stimuli, such as a light touch on the skin, Burton said.

“We’ve seen in the past that, in models of diabetes or obesity, only a subsection of the people or animals experience allodynia, and if they do, it varies across a spectrum, and it isn’t clear why,” Burton said. “We hypothesized that there had to be other precipitating factors.”

Burton and his team looked for saturated fatty acids in the blood of the mice fed the high-fat diet. They found that a type of fatty acid called palmitic acid—the most common saturated fatty acid in animals—binds to a particular receptor on nerve cells, a process that results in inflammation and mimics injury to the neurons.

“The metabolites from the diet are causing inflammation before we see pathology develop,” Burton said. “Diet itself caused markers of neuronal injury. Now that we see that it’s the sensory neurons that are affected, how is it happening? We discovered that if you take away the receptor that the palmitic acid binds to, you don’t see that sensitizing effect on those neurons. That suggests there’s a way to block it pharmacologically.”

Burton said the next step will be to focus on the neurons themselves—how they are activated and how injuries to them can be reversed. It is part of a larger effort to understand better the transition from acute to chronic pain.

“The mechanism behind this transition is important because it is the presence of chronic pain—from whatever source—that is fueling the opioid epidemic,” he said. “If we figure out a way to prevent that transition from acute to chronic, it could do a lot of good.”

“The biggest reason we do research like this is because we want to understand our physiology completely,” he said. “Now, when a patient goes to a clinician, they treat a symptom, based off of an underlying disease or condition. Maybe we need to pay more attention to how the patient got there: Does the patient have diabetes-induced or obesity-induced inflammation; has a terrible diet sensitized them to pain more than they realized? That would be a paradigm shift.”