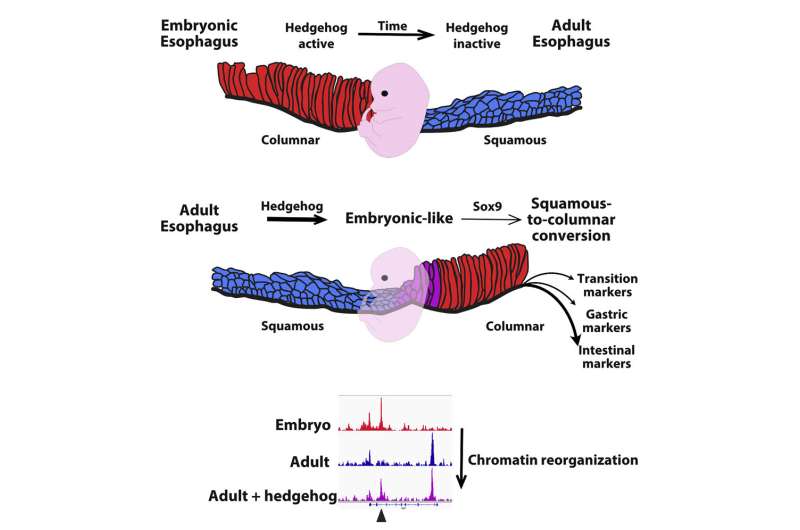 Metaplasia is defined as the replacement of a fully differentiated cell type by another. There are several classical examples of metaplasia, one of the most frequent is called Barrett’s esophagus. Barrett’s esophagus is characterized by the replacement of the keratinocytes by columnar cells in the lower esophagus upon chronic acid reflux. This metaplasia is considered a precancerous lesion that increases by around 50 times the risk of this oesophageal adenocarcinoma. Nonetheless, the mechanisms involved in the development of metaplasia in the esophagus are still partially unknown.

Alizée Vercauteren Drubbel and colleagues used state-of-the-art genetic tools and mouse models to dissect the molecular mechanisms by which cells from the esophagus can participate to metaplasia. In collaboration with Prof. Sachiyo Nomura (Tokyo Medical University, Japan), they demonstrated that the reactivation of the Hedgehog pathway occurs in epithelial cells upon chronic acid reflux. The sole reactivation of this pathway in normal oesophageal cells changes them and make them look like embryonic oesophageal cells. Subsequently, a subset of these cells is converted into columnar cells. “It was really surprising to see the cells from the esophagus slowly changing over time and getting features of other tissues just by activating a signaling pathway in vivo” comments Alizée Vercauteren Drubbel, the first author of this study.