The Australian F1 Grand Prix has been dropped as the opening race of the 2022 season as authorities allow more time for travel restrictions to ease.

The race was not run in Melbourne in 2020 and 2021 due to the COVID-19 pandemic and subsequent lockdowns and travel restrictions, with the 2020 event sensationally called off on race-eve as the pandemic began to grip the world in early 2020. 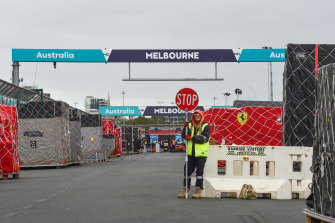 The 2020 Melbourne Grand Prix was cancelled at the last minute as the coronavirus pandemic reached Australia. Credit:Justin McManus

The Bahrain Grand Prix will begin the 23-race season in March with organisers wanting to avoid clashes with the 2022 FIFA World Cup in Qatar in November.

Races in Australia, Singapore, Canada and Japan — all cancelled for the past two seasons — were included on a calendar published on Saturday AEDT while the Chinese GP was again left off the schedule for the third year in a row.

“Due to ongoing pandemic conditions, China will not be included on the 2022 calendar. China will be restored to the calendar as soon as conditions allow,” Formula One said.

The Miami Grand Prix on May 8 is new for 2022, providing a second round in the United States. It remains subject to approval of the circuit, which runs around the city’s Hard Rock Stadium — the home of the Miami Dolphins NFL team.

The US Grand Prix in Austin, Texas, is on October 23 subject to a new contract being agreed.

Singapore’s night race on October 2 was also subject to contract, along with Italy’s Imola and Spain’s Circuit de Catalunya outside Barcelona.

This year was supposed to have 23 races as well but has ended up with 22, using Turkey’s Istanbul Park and Portugal’s Portimao circuits as stand-ins to fill gaps left by cancellations while Saudi Arabia and Qatar debut. 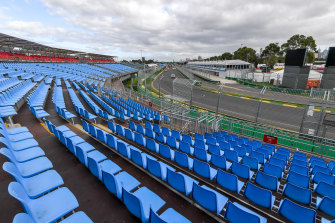 The last time the stands were erected at Albert Park was 2020. Credit:Justin McManus

Around a third of the races next year are expected to be under a new Sprint format trialed this year at Silverstone and Monza, with a third to come at Interlagos in Brazil next month.

“We are excited to announce the 2022 calendar as we prepare to enter a new era for the sport with brand new regulations and cars for next year that are designed to create closer racing,” said Formula One chief executive Stefano Domenicali.

“We look forward to welcoming more fans back next season and hope 2022 feels more normal than the life we have all experienced in the past two years.”

The 2022 calendar will feature seven back-to-back pairs of races and two triple-headers.

Britain’s Lewis Hamilton could be a record eight times world champion by then, with the Mercedes driver battling Red Bull’s Max Verstappen for this year’s title.