Lewis Hamilton locks up after the restart

Verstappen looked poised to race to the flag following a slow pit stop for Hamilton.

But a terrifying rear-left puncture sent the Red Bull driver out of control and into the concrete wall on the right-hand side of the start-finish straight.

Verstappen was able to walk away from the high-speed crash, kicking the tyre which had failed, with the safety car deployed.

The race was then suspended on lap 49 of 51 after Red Bull sporting director Jonathan Wheatley urged FIA race chief Michal Masi to red-flag the event fearing another devastating puncture.

The drivers were permitted to take on fresh rubber for what was effectively a two-lap race before Hamilton launched a gung-ho move on Perez for the win only to run down the escape road at the opening corner in a plume of tyre smoke.

“I am so sorry, guys,” said the world champion.

Sebastian Vettel rolled back the years to drive from 11th to second to claim Aston Martin’s best result of their return with Pierre Gasly third for AlphaTauri.

Hamilton started from second before taking the lead at the beginning of the third lap when he roared past pole-sitter Charles Leclerc on the start-finish straight.

Verstappen and team-mate Perez followed suit on laps seven and eight to put the pressure on Hamilton, who had been unable to build a gap in a Mercedes which has largely been off the pace this weekend. 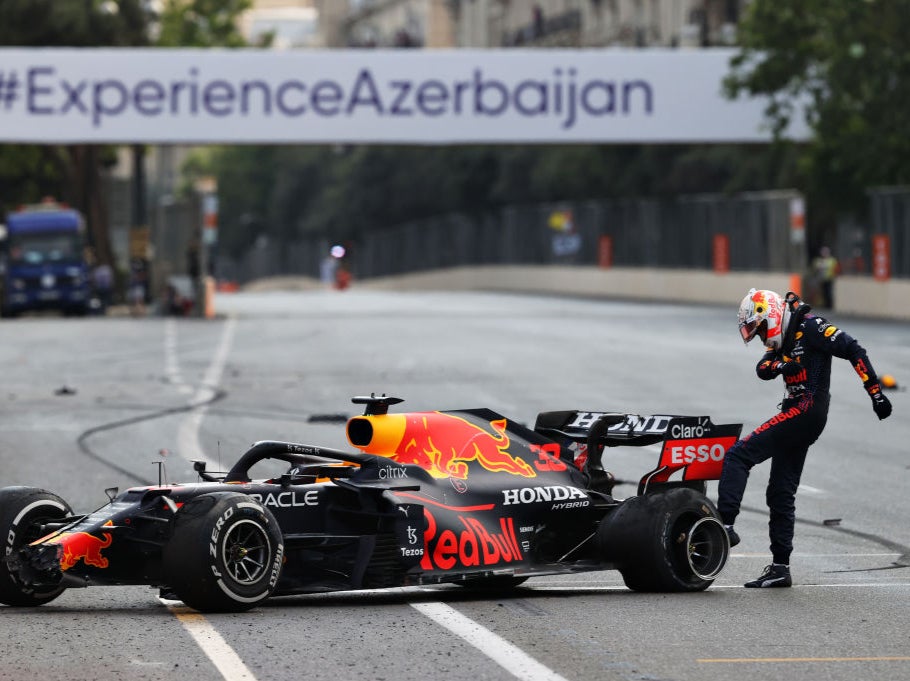 Hamilton then made his sole stop on lap 11, but with Gasly pitting at the same time, the seven-time world champion’s release was delayed.

The Mercedes driver’s pit-stop took 4.6 seconds, paving the way for Verstappen to take the lead of the race when he pitted for fresh rubber on the following lap. Hamilton’s slow stop also enabled Perez to leapfrog him.

While Verstappen remained unchallenged at the front, Hamilton hustled Perez, but despite being faster than the Mexican in the final sector he was unable to find a way past.

On lap 31, Stroll suffered the first terrifying puncture. The high-speed failure sent Stroll’s Aston Martin into the concrete wall on the left-hand side of the pit-straight, but while the Canadian sustained extensive damage to the front of his car he emerged unscathed from the horror crash.

The safety car was deployed for five laps to clean up the debris, with Verstappen executing the perfect re-start to leave Perez trailing.

Behind, Vettel, who ran longer in his first stint to lead the race for a brief period, then fought his way past Leclerc and Gasly to move up to fourth.

Verstappen was in complete cruise control – on course to move 16 points ahead of Hamilton – until the dramatic late turn of events on the Caspian Sea.

The race was suspended for 30 minutes and ahead of the re-start Hamilton told his team “you have to remember this is a marathon not a sprint”, seemingly content to take second and his 18-point haul.

But the seven-time world champion sensed an opportunity to pass Perez and win the race at the first bend only to run off the circuit.