Valtteri Bottas took pole position for the Portuguese Grand Prix on Saturday to deny Mercedes teammate and championship leader Lewis Hamilton a record-extending 100th by a mere 0.007 of a second.

Seven-time Formula One world champion Hamilton, winner from pole last year at the Algarve circuit, completed a first front-row sweep of the season for his team. 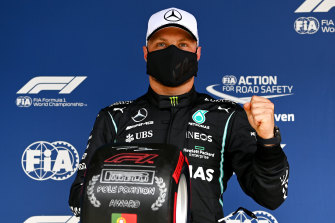 Valtteri Bottas took pole position by 0.007 of a second.Credit:Getty Images

Red Bull’s Max Verstappen, a point behind Hamilton after two races, will start third after having his first flying lap on soft tyres of one minute, 18.209 seconds deleted for running too wide.

But for that mistake on a gusty but bright afternoon at a rollercoaster of a circuit, the Dutch youngster’s time would have been the fastest.

Bottas took pole in 1:18.348, setting the time with his first flying lap on soft tyres before switching to the medium compound.

It was the Finn’s 17th pole and first since Bahrain’s Sakhir Grand Prix last December.

“It feels like it’s been a while. It was nice to get a good qualifying, it’s been a weak point for me in the first two races, getting the tyres to work,” said Bottas.

“This weekend we’ve been working hard and it’s nice to see it’s paying off and it puts me in a good position for tomorrow.”

Bottas will be the third different driver to start on pole in three races and nobody has so far won from the top slot in 2021.

He could also thank his mechanics who won their own race against time to get the car ready for the session after Mercedes detected a problem with a gearbox sensor and had to swap it out.

Hamilton, who took his 99th pole at the previous race in Imola won by Verstappen, had been fastest in the second phase of qualifying but could not find anything extra in the final minutes.

“Not the perfect lap but I gave it everything,” said the Briton.

Verstappen said he had been struggling a lot for grip.

“That first lap in Q3 was decent but I just had a big moment in [turn] four and went a little bit off track,” he explained.

“I was quite confident we could do another good lap but in the last sector the car in front in the last two corners just disturbs you, especially with the low grip we already have and the tough wind out here. 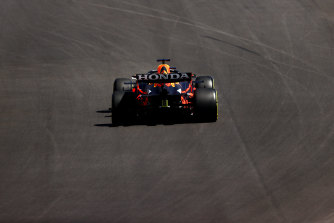 Max Verstappen had the fastest lap but it did not stand.Credit:Getty Images

“It cost me a lot of lap time. It is what it is. We’ll try to fight them tomorrow in the race.”

Verstappen’s Mexican teammate Sergio Perez will join him on the second row, surviving a spin into the gravel in the opening phase, with Ferrari’s Carlos Sainz fifth and Alpine’s Esteban Ocon filling the third row.

There was disappointment for Australian Daniel Ricciardo who failed to get his McLaren beyond the first session and will start back in 16th place.

“Just a disappointing day … I wouldn’t have bet on this today so I’ve just got to figure it out and get some sleep and wake up tomorrow ready to do better,” he said.

Williams driver George Russell, who was involved in a high-speed collision with Bottas at Imola that ended the race for both of them and wrecked the Finn’s car, had a good afternoon and will start 11th.

That was Williams’ best performance on a Saturday since the 2018 Italian Grand Prix at Monza, when Canadian Lance Stroll qualified 10th, and his best for the team.

Stroll, now at Aston Martin, qualified 17th with German teammate and four-time champion Sebastian Vettel having a better day with 10th on the grid.

The race is being held without spectators due to the COVID-19 pandemic.