Australian Grand Prix bosses say they do not have to start building infrastructure at Albert Park for Formula One until September and are hopeful the three months of breathing space will work in their favour as speculation mounts that the race could be called off.

And there is hope any shortened quarantine period approved by the NSW for special events would increase the likelihood of Formula One and MotoGP races going ahead in Victoria this year. 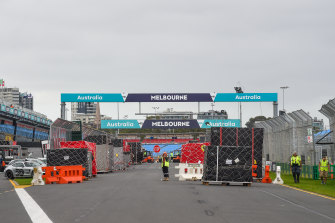 The Melbourne Grand Prix was cancelled last year at late notice and has been postponed this year to November.Credit:Justin McManus

The Grand Prix Corporation is keeping tight-lipped about the prospects of staging the F1 race in late November, after Singapore became the latest host city to have its race scrapped this season due to COVID-19 restrictions on immigration.

Sources with knowledge of the planning situation said Singapore would have had to start building their infrastructure soon as their race was due on October 3. But given the timing of Melbourne’s race, organisers in Australia had more time up their sleeves.

Melbourne’s race, which was originally scheduled to take place on March 21 at Albert Park, has already been pushed back to November 19-21 due to the pandemic.

The Singapore race was due to be held in October. Melbourne’s race is scheduled two weeks after the F1 race in Brazil, which has been particularly hard-hit by COVID-19.

Australia is also set to host a MotoGP race, to be staged at Phillip Island. That is pencilled in for October 24, two weeks after a race in Thailand.

Teams and competitors would not have time to serve what is currently a mandatory two-week quarantine period in Australia following the races in Brazil and Thailand.

But in the first sign of a potential change to rules for international arrivals to Australia, state Treasurer Dominic Perrottet said on Sunday that the NSW government was open to making exceptions to the 14-day quarantine period for special events.

The NSW government said it supports allowing the Socceroos to play a World Cup qualifier in Sydney after a quarantine of just five days – subject to NSW Health approval – after Football Australia made an approach to see if quarantine restrictions could be relaxed later this year.

Motorsport sources believed that if the NSW government approved a shorter quarantine period for the Socceroos, it could make both the F1 and MotoGP races more likely to take place.

They stressed that the government would have the final call and public health would be paramount, but said that logically, if there was a precedent for a five-day quarantine and the Victorian authorities felt it was safe to adopt a similar protocol, it would make it easier for teams and crews to get into Melbourne within the timeframe and stay in a bubble, especially as they would be vaccinated.

If it gets the green light to do so, the FA hopes to stage a game between the Matildas and the world champions USA in late November – in Melbourne, circumstances permitting.

“We have to get through the second round which is going on now but it looks very likely that we will, so we are looking ahead to the next stage on the road to Qatar,” an FA spokesman said.

Asked about the likelihood of the Formula One race being called off, Victorian Sports Minister Martin Pakula was relectant to speculate.

“The corporation is in ongoing discussions between my department, health, CQV and [those talks] are very complex, very delicate, I do not propose to have those in the public domain.”

There remain a number of issues to sort out regarding the quarantine teams and drivers will need to undertake to enter Australia along with other issues which need to be negotiated between F1 and state authorities, he said.

Pakula was adamant the challenges of planning the grand prix could not be compared with hosting a domestic event such as the AFL grand final, which he said would be held at the MCG this year.

Grand Prix organisers said interest in tickets was strong, though they are not yet on sale, with the bikes leading the way.

“Registrations of interest for this year’s Australian Motorcycle Grand Prix are as high as they were in the Casey Stoner years, an era where he won six Phillip Island titles and picked up two world championships along the way,” said Grand Prix Corporation boss Andrew Westacott.

“Jack Miller winning back to back races this year and sitting fourth in the MotoGP World Championship along with Remy Gardner winning last week in Mugello, leading the Moto2 World Championship have all fuelled this demand. There’s also rumours of this being Valentino Rossi’s last race on Australian soil.”