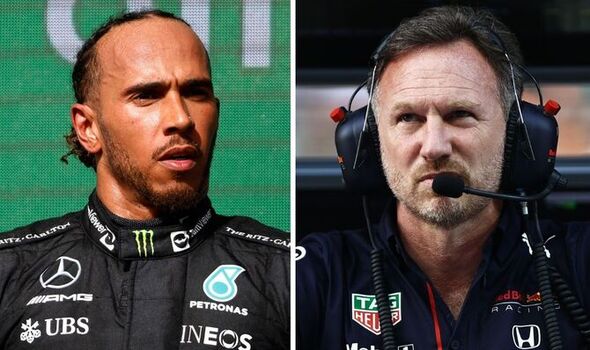 Red Bull team principal Christian Horner believes Lewis Hamilton should take some responsibility for the Brazilian Grand Prix collision between him and Max Verstappen. Hamilton and Verstappen were embroiled in a bitter battle for the title in 2021, but Mercedes have been unable to keep up with Red Bull this year.

It’s meant that on-track battles between the two F1 rivals have been few and far between in 2022. But Mercedes have turned a corner in recent months with Hamilton doing everything to keep up his record of winning a race in every single season he’s raced in F1.

His best chance came at last weekend’s Brazilian Grand Prix with Mercedes finally having a faster car than Red Bull and Ferrari. Hamilton was behind team-mate George Russell on the grid, but would have fancied his chances to put up a fight throughout the race.

But he ended up having to fight his way through the pack for most of the Grand Prix after a collision with Verstappen early on. The Dutchman attempted to make his move on Hamilton following a Safety Car period going into the Senna S corners.

Verstappen initially had his nose in front, but Hamilton pulled back ahead slightly with neither driver pulling out and eventually coming together. Hamilton kept his car together, although he was forced off the track while Verstappen lost his front wing.

Race stewards deemed Verstappen responsible and he was given a five-second time penalty while Hamilton escaped any punishment. But Horner feels Verstappen was unfortunate to be the only one punished and pointed out that it was his only ‘incident’ of the 2022 season.

“Max deserved more space than he got,” Horner said. “Lewis could give him more space, because Max had already passed it in the corner before.

“It’s a shame, but I think it’s the only incident this year where Max was involved. In the end, Max suffered with the penalty and the consequences in the race. Very frustrating.”

He added: “I think that’s a tough question, but it’s more for Lewis. It’s the only contact for us this year and as I said, Max deserved more space. We were surprised by the penalty. It felt like a race incident.”