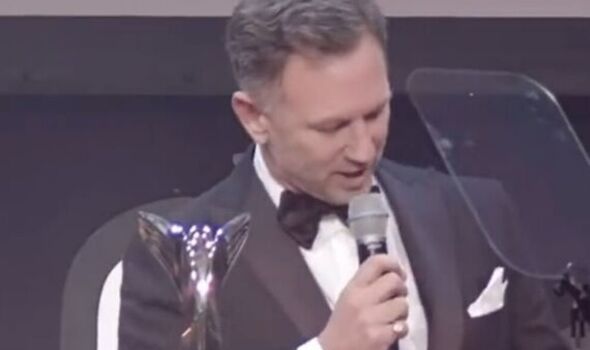 Red Bull chief Christian Horner joked that his Mercedes rival Toto Wolff was the Rookie of the Year at the Autosport Awards last weekend. Horner led Red Bull to a dominant season with Max Verstappen winning the driver’s championship and his team clinching the constructor’s title for the first time in nine years.

Mercedes had dominated the constructor’s championship before this season winning eight consecutive titles, but saw this run ended by Red Bull. Horner was presenting the Rookie of the Year award at the Autosport Awards and took the opportunity to have a dig at his rival.

“Yes and the winner is Toto (Wolff),” joked the Red Bull principal causing laughter from the crowd. “No, no it’s Zhou Guanyu.” The joke caused quite a stir online as Autosport tweeted a video of the moment with the caption: “Christian Horner said WHO was the Rookie of the Year?”

However, some fans criticised Horner for the joke. One said: “I get that its a joke but why is Toto living in his head rent free.” Another thought the pair were fuelling their rivalry on purpose for fans. They added: “LOL – the level of entertainment between Christian and Toto is top notch. Both are super smart to feed the rivalry. Sells tickets and t-shirts.”

During last year’s championship, Mercedes driver Lewis Hamilton and Red Bull’s Max Verstappen battled for the world title and so did both of their principals. Horner admitted that he and Wolff had a ‘heated exchange’ away from the cameras in race control after last season’s British Grand Prix.

Wolff took aim at his rival last season, telling the Daily Mail: “I feel he is one of the protagonists in a pantomime, part of the Formula 1 cast, and for me as a stakeholder, as a team owner, it’s great that he creates these kinds of stories. But it’s irrelevant. People have a microphone in front of them or a camera on them and they start to behave like little actors, like Hollywood.”

After Verstappen controversially won the crown in Abu Dhabi last year, Wolff was seen smashing his headset and Horner came out on top. Speaking on the ‘Diary of a CEO’ podcast, Horner said: “For me, last year’s world championship was very much about that and you could see it was a titanic battle, not just between the two drivers on track but by the two teams off the track.

“And the person that you’re gauging yourself against and are pitched against as a team principal is your opposite number. It’s a mental game as much as a physical activity as well and, of course, it was the first time that that team, in a seven or eight-year period, had come under any form of pressure.”