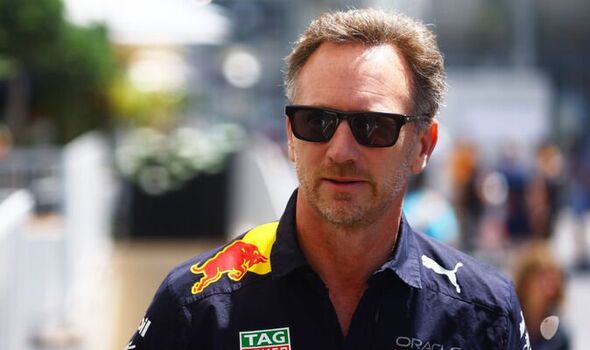 Christian Horner has taken aim at Mercedes after Lewis Hamilton recorded his second podium finish of the season, telling Red Bull’s rivals to catch up with their developments. Hamilton and team-mate George Russell have frequently complained of their W13 cars ‘bouncing’ and have campaigned for a change in the FIA’s rules to prevent injury.

Fresh regulations introduced at the start of the Formula One season forced teams into completely redeveloping their cars. Mercedes have found it tougher than others and their two drivers have struggled with porpoising.

Last week, the FIA announced a series of measures to prevent the bouncing in the interests of safety. It came after other teams also spoke of experiencing the phenomenon in the new generation of cars.

But Horner, whose Red Bull drivers have not had as much trouble with their cars, feels that Mercedes simply need to catch up with their redevelopments. It comes after Hamilton finished third at the Canadian Grand Prix.

JUST IN: Lewis Hamilton warned to be ‘careful’ by Mercedes after Canadian GP

“The issue with Mercedes is more severe, or certainly has been prior to [Canada] than any other car. That surely is down to the team. That’s within their control to deal with that, if it’s not affecting others,” Horner said after Red Bull’s Max Verstappen recorded another win to extend his lead in the World Drivers’ Championship.

“I know it was said other drivers have been complaining. Our drivers have never complained ever about porpoising. They’ve said certain circuits could do with tidying up, perhaps resurfacing in places.

“But we haven’t had an issue with bouncing. The problem is they’re running their car so stiff. I think their concept is the issue rather than the regulation.”

Horner admitted he would be surprised if the bouncing problem was still being talked about next season, adding: “These cars are still relatively new, I think as teams add developments to their cars, you’ll probably start to see them start to address some of these issues.

“And you can’t just suddenly change technical regulations halfway through a season. If a car is dangerous, a team shouldn’t field it: it has that choice. Or the FIA, if they feel an individual car is dangerous, they always have a black flag at their disposal.”

Hamilton overcame a disastrous practice session in which he complained that his car was “undriveable” and that updates made to the W13 were a “disaster”. The Briton – who has generally finished in the middle pack this season – was delighted with his podium finish, while Russell came fourth on an improved day for Mercedes.

But Mercedes chief Toto Wolff was keen to manage expectations. He said: “Everybody is in a good space but there’s lots of work to do. One swallow doesn’t make a summer. We saw that swallow in Barcelona but somehow it flew somewhere else. Today, at times, we were with the quickest cars.

“On the second stint, Lewis and George were almost matching the frontrunners, but we’re not yet there. Now we should manage our own expectations and really grind away, look at the data and come up with some sensible solutions for Silverstone going forward.”