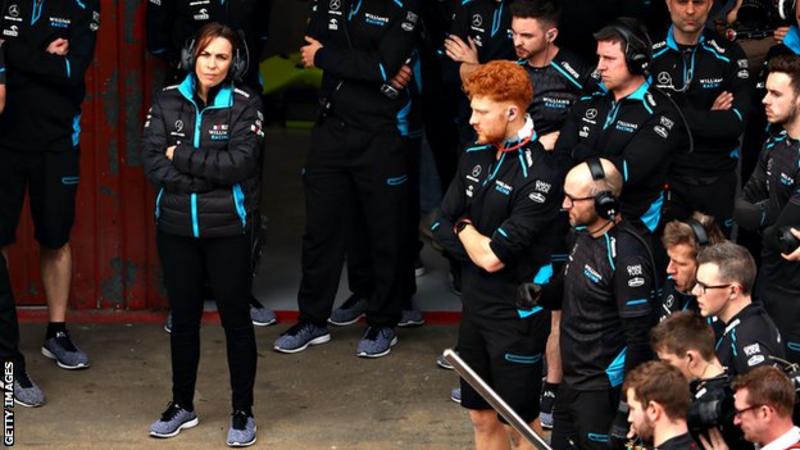 Deputy principal Claire Williams says her Formula 1 team’s struggles are “not because I have a child”.

Nine-time constructors’ champions Williams endured their worst season in 2019, and have not won a race since 2012.

Claire Williams, who has run the team since 2013, said it has been suggested to her that the issues coincided with her becoming a mum in October 2017.

She said people “maybe give me a rougher time because I am a woman”.

Williams added: “I have had someone say to me that a lot of people in the Formula 1 paddock think that the team started doing badly when I fell pregnant and had a baby.

“Am I not allowed a child because I am a woman running a Formula 1 team? It is a disgraceful attitude, and a very 19th-century attitude.”

Williams said she wants to “use the fact I am a woman in this male-dominated world” to change attitudes within the sport.

“I would love to walk down the paddock this year having taken the team to a better place, to show that I can be a wife, I can be a mother and still run a Formula 1 team in a successful way,” she said.

Williams assumed the day-to-day running of the team from her father Sir Frank in 2013, and oversaw a third-placed constructors’ finish the following season.

But the team finished bottom last year having scored just one point with a car nearly 1.5 seconds slower than the next slowest on the grid.

Williams said that, because of her role, she had “rightly” taken “a huge amount of criticism”.

“I am not on social media, I don’t engage and I don’t read the coverage as to whether people are saying Claire Williams should go,” she said.

“It is about what you do as a human being when you are on your knees that counts. I know the job I do and the value I bring to this team.”

She said “fundamental changes” are needed – not only in F1 – as to “how we address women in the workplace” because “it is so far behind the times”.

Her comments come in the same month six-time world champion Lewis Hamilton used his Laureus Sportsman of the Year speech to highlight the lack of diversity in F1.

The first race of the new season is the Australian Grand Prix in Melbourne on 15 March.