Lewis Hamilton will look to secure his 91st F1 race win this afternoon which will help him draw level with Michael Schumacher’s record. However, he will not have an easy task fending off Max Verstappen and Valtteri Bottas.

Hamilton secured pole position in qualifying to give himself the best shot of extending his lead at the top of the Drivers’ Championship.

But the Brit does not think the front of the grid is the best place to start in Sochi as he has concerns over the first couple of corners.

“It’s not a good place to start at all,” he said. “And this year our cars are more draggy and there is more tow than we have seen in other years.

“I genuinely expect one of these two to come flying by at some point.”

Hamilton will start the race on soft tyres, which gives the best grip off the line. However, Vertappen and Bottas will start on the more durable mediums. 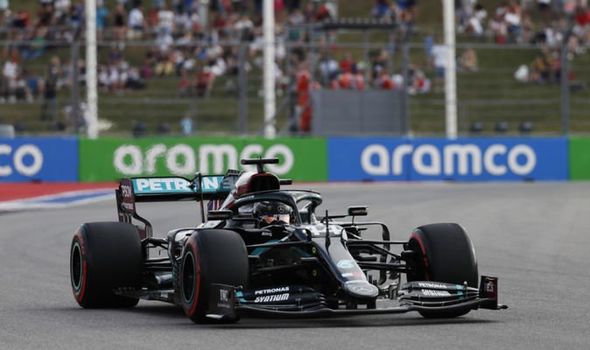 “I am on the worst tyre,” Hamilton admitted. “It is a good tyre to do an actual start, but it has the biggest degradation – 10 times more than any other tyre, I think it is – so that’s going to be a struggle.

“I don’t know if that puts me on to a two-stop [strategy]. Unlikely, because the pit lane is too slow so I am just going to have to nurse those tyres as far as I can.”

Mercedes team boss Toto Wolff said: “It is not the optimum strategy because after some laps the soft is clearly going to suffer and that means it compromises your whole race because you probably need to pit into traffic and that is not a great situation.

“But Lewis is the best overtaker in the field and I hope he can make his way back because he was the quickest driver on track today.”

Adblocker must be turned off to see updates