Lewis Hamilton is the undoubted leader and star of Formula One on the track, as his six world drivers' championship titles illustrate.

But in a week of unprecedented drama, chaos and confusion, the 35-year-old Briton showed he was also the leader off the track with his stark condemnation of the way organisers seemed prepared – right up to the last minute – to run the Australian Grand Prix despite the coronavirus pandemic. 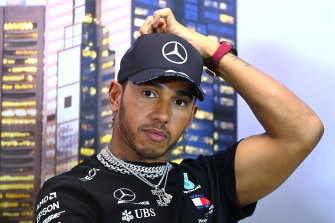 Hamilton's intervention at a media conference on Thursday afternoon, when he declared he was shocked and surprised that the race was still going ahead, showed an ability to read the room, gauge public opinion and express what needed to be done in a clear and concise manner that not just his fellow drivers but many politicians could learn from.

He might not have shifted the dial completely, but his statement certainly changed the conversation and might well have concentrated minds ahead of the decision that was made on Friday morning.

He led the way and made it easier for his contemporaries to speak out and express themselves rather than use platitudes such as "we can only trust in the FIA and Formula One", which is how most of them sought to deal with the situation.

His barbed response when asked about the testing process (to see if the grand prix team staff, who had been quarantined, had the virus or not) also spoke volumes about his confidence and ability to cut through.

"I heard that results are not going to come back for five days or something … coincidental," Hamilton said, alluding to the fact that, had it taken that long, the GP would have been run and won before the results came through.

As it happened a McLaren team member's test proved positive late Thursday night, sparking the team’s withdrawal from the race and precipitating the GP cancellation.

Hamilton has grown in stature throughout a career in which he has always been at the sharp end of the grid. But he has not always been the most popular figure, sometimes enjoying what appears to have been a love/hate relationship with the media, especially in the UK.

But it was no accident that his "cash is king" statement – implying that F1 bosses wanted to continue the race for financial reasons – captured the imagination in a graphic fashion unmatched by anyone else in the paddock. At least publicly.

Whether it reflected the truth, it was a key question at the media conference headed by Formula One chief Chase Carey that formally announced the cancellation of the Australian Grand Prix.

Hamilton has spoken out before, raising awareness of racism not just in his own sport but in western society. He has become a vegan and drawn praise for his public comments on the environment and his commitment to helping fund conservation and wildlife.

Hamilton donated $500,000 to Australian bushfire relief funds earlier this year. When he arrived here, he flew straight to Sydney and drove to the Blue Mountains, so that he could see first-hand the regrowth and vegetation in devastated regions, images of which were broadcast around the world during the northern hemisphere winter and clearly made a huge impression on him.

Hamilton has been involved in the music business, fine art, fashion and the film industry as he uses his wealth and influence to develop projects and interests away from the racetrack. But it is F1 that gave him his chance to make his mark on the world and the platform to express his views.

It will be his exploits this season (if there is one), and for however long he continues, that will establish his reputation as one of the greats, not just in his own field but in the whole of sport.