Ferrari offered the first real glimpse of their 2020 car’s pace by hitting the front of the testing timesheets in Barcelona – but Mercedes suffered their first big stoppage of the winter after the W11 broke down.

Lewis Hamilton was just 14 laps into his afternoon running when an ‘oil pressure anomaly’ shut off his Mercedes engine on precautionary grounds. Williams have also experienced engine-related issues with their Mercedes unit.

The world champions did not return to track while they investigated the issue which meant they ended testing’s penultimate day with an unusually low tally of 61 laps.

Nonetheless, they remain the team to have posted by far the quickest times so far at Barcelona overall heading towards Friday’s final day – although Ferrari moved up to second on the combined timesheet on Thursday with their best time of the winter.

A run on the fastest C5 tyres for Sebastian Vettel during the morning delivered a best time of 1:16.841. However, on the same compound, Mercedes did go 1.1s faster last week. 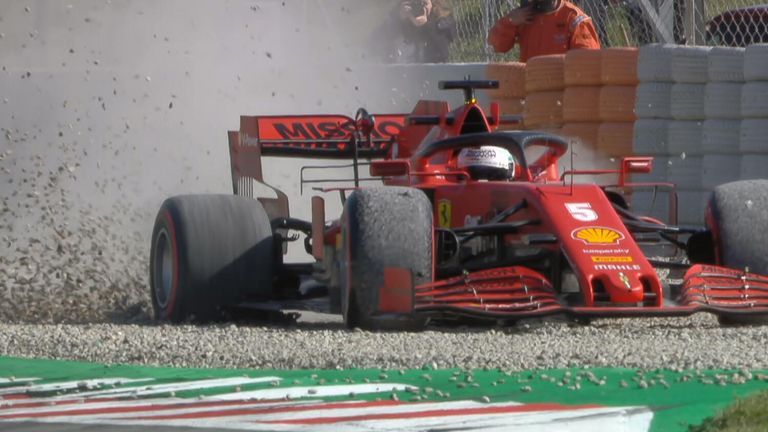 Ferrari combined that headline time with reliable long running as Vettel completed his final day in the car before the Australian GP with 145 laps.

“I think we are anticipating in the past days that we are not sufficiently fast,” said Ferrari team principal Mattia Binotto to Sky F1. “The timing today, when looking at the race simulations, we have not been the fastest.

“The season will be very long, so let’s complete the test, let’s see tomorrow with Charles (Leclerc), let’s try to better understand the car and certainly address what’s necessary to do.”

Pierre Gasly was second for AlphaTauri after moving up the timesheet in the afternoon, with Lance Stroll third for the impressive Racing Point who are shaping up very competitively ahead of Melbourne. Stroll’s fastest time was within 0.3s of Vettel’s despite running harder tyres.

“Our car looks pretty good compared to where we were a year ago,” said Racing Point chief Otmar Szafnauer.

But he insisted it was “wishful thinking” to suggest the new RP20, which the team have admitted is based on last year’s title-winning Mercedes, could beat Ferrari in Melbourne. Red Bull’s Max Verstappen, meanwhile, completed only 31 laps in the morning session after twice running off track – spinning at the final chicane for the third time this winter and then beaching the RB16 in the gravel at Turn Five.

Verstappen told Sky: “I had my own little spin because I touched the damp patch on the track.

“It’s very windy and all the cars are struggling in those conditions. I’m very happy, but there are always things to improve.”