Formula Three star Isack Hadjar screamed down his team radio after a massive accident in qualifying for races at the Italian Grand Prix. Hadjar ran wide at the final corner and was thrown across the gravel trap in a violent shunt.

The French youngster then smashed into the tyre wall, ending his qualifying session early in a season-defining weekend. He screamed: “No, no, no, I destroyed the car, no.”

The Alpha Tauri junior lies just five points behind championship leader Victor Martins in the standings with just two races remaining. The accident leaves the title contender 16th on the grid for Sunday’s race with Martins as high as P4.

Hadjar is one of six drivers fighting to secure the championship this weekend, including Charles Leclerc’s younger brother Arthur. However, the Prema driver lies P6 in the standings and a hefty 24 points behind the championship leader. 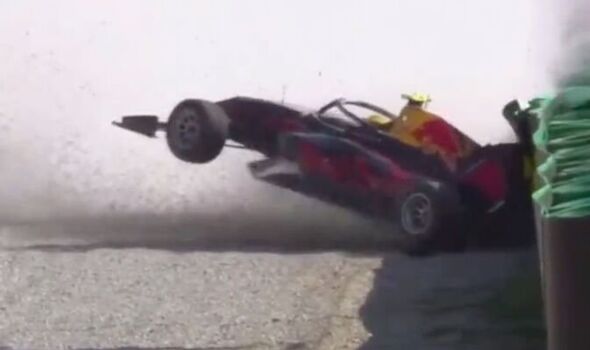 The Curva Alboreto, formerly Parabolica, is one of the most famous corners in F1 history and has caught out many drivers. Leclerc suffered a heavy crash at the tight right hander at the 2020 Italian Grand Prix after suffering a snap of oversteer.

Leclerc sounded winded after the smash as he admitted it was a “big crash”. Derek Warwick also suffered a massive accident at the corner back in 19890.

After running wide, the British diver smashed into the armco barrier which ripped his Lotus to shreds. Thankfully, Warwick was able to walk away from his destroyed vehicle seconds later and even ran to his spare car for the restart.

The corner also has a history of major accidents in F3 with Alex Peroni involved in an accident back in 2019. Peroni collided with a sausage kerb which chucked his car up into the air and over the barrier in a sickening accident.