Amid Oscar Piastri’s sensational claim that he would not be driving for Alpine next year, despite a statement from the team saying he would be doing so, the man he has replaced Fernando Alonso was seen uploading a poorly-timed post on his Instagram. Piastri was initially confirmed as one of Alpine’s drivers for 2023 on Tuesday afternoon.

The announcement and reported appointment came after Spaniard Alonso was announced as an Aston Martin driver for next season, leaving a spare seat at Alpine. Confirming Piastri as this replacement the Enstone-based side wrote: “After four years as part of the Renault and Alpine family, Reserve Driver Oscar Piastri is promoted to a race seat alongside Esteban Ocon starting from 2023.”

Less than two hours after his promotion was confirmed, the current reserve driver took to social media to rubbish his team’s statement, reiterating that there was no agreement in place for him to drive with Alpine next season. Piastri wrote on Twitter: “I understand that, without my agreement, Alpine F1 have put out a press release late this afternoon that I am driving for them next year.

“This is wrong and I have not signed a contract with Alpine for 2023. I will not be driving in Alpine next year.” The contrasting statements have caused chaos in the world of Formula 1, especially for the chiefs at Alpine.

JUST IN: Max Verstappen’s reason he is ‘happy’ Lewis Hamilton is challenging 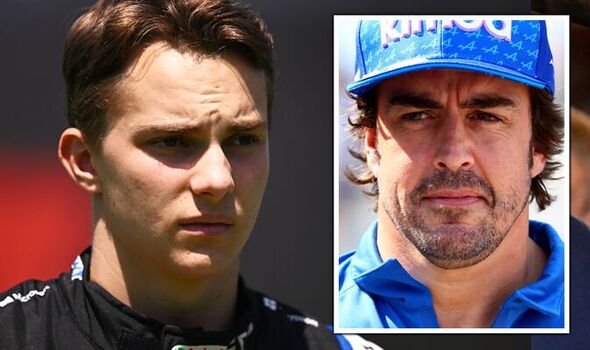 Meanwhile soon to move on driver Alonso was criticised for a poorly-timed post on social media, after he uploaded a smiling selfie with his thumbs up on his Instagram story amid the saga surrounding his employers. The Spaniard’s switch to Aston Martin came after four-time Sebastian Vettel announced he would be retiring at the end of the current season.

Alonso’s current boss Otmar Szafnauer was seemingly kept out of the loop on the move, after he revealed that he only became aware of the move via Aston Martin’s press release. Speaking on his driver’s move, Szafnauer said: “Obviously when we’re in the paddock, there’s all sorts of rumours, and I had heard rumours that Aston were interested [but] it was the first confirmation I had.

“Once you hear that they’re interested, there’s probably discussions that took place. I was confident that, even with the discussions, and there’s nothing wrong with exploring, that we were very close [to a new deal].”So yes, the first confirmation I had was the press release.” Revealing that Alonso had informed him he had not signed an Aston Martin deal he added: “I did ask the question (to Alonso). And I was told ‘No, no, I haven’t signed anything’. So I was a bit surprised.

“We offered a one plus one deal. And we discussed with Fernando that: ‘Look, if next year at this time you’re performing at the same level, of course, we will take you and that could have carried on’. But I think he wanted more certainty independent of performance.”