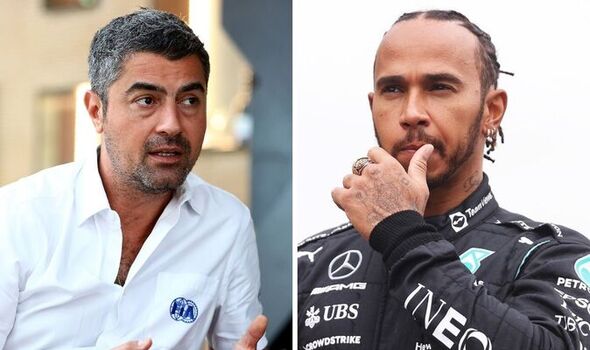 Lewis Hamilton and Mercedes could both be ‘enraged’ if FIA president Mohammed ben Sulayem follows through on a plan to bring Michael Masi back into F1. Masi came under huge scrutiny last season after his decision to allow Max Verstappen to close up to Hamilton in the final lap of the title-deciding Abu Dhabi Grand Prix.

Masi ultimately paid with his job with the FIA replacing the Australian with two race directors for the new season. Toto Wolff praised the FIA for the change in race director while Hamilton was hopeful of the sport being able to now “move forward”.

Masi has remained on the FIA payroll with Ben Sulayem confirming back in March that “another place” would be created for the former race director. But the FIA president has now claimed that Masi could well be set for a return to his role in F1.

“I spoke to him two days ago,” Ben Sulayem told the Daily Mail. “I have no personal issue (with him). I don’t hate anyone.

JUST IN: Lewis Hamilton’s Mercedes chairman explains why team will remain in F1

“Our race structure was wrong organisationally. And though we have brought in two new race directors, I wouldn’t say we have got it all right yet. We need to clean the stables. It’s not like going to a supermarket and asking for some more stewards. You need firm and fair people, tolerant people.

“I am thinking, for example, of bringing in rally co-drivers, who have plenty of multi-tasking skills that are required, and training them up. We need a recruitment drive. This lack of people in the FIA needs to be addressed. I would like to see a minimum of three race directors, ideally by the beginning of next year.”

The report goes on to claim that Masi returning to F1 would ‘enrage’ both Hamilton and Mercedes. Niels Wittich and Eduardo Freitas came in as the new race directors for the 2022 season, but the latter is only set to make his debut next week in Barcelona.

Herbie Blash has also acted as an advisor to the race director this season, who previously worked with Charlie Whiting. Wittich has so far been the man pushing the FIA’s safety regulations on wearing jewellery, which has also caused a stir for Hamilton so far this season.