The all-conquering Mercedes Formula One team have been tearing up the track in testing in Barcelona, and former F1 star Mark Webber cannot see them being beaten in the season opener in Melbourne in just over a fortnight's time.

But Webber is not expecting a role reversal when the cars hit the track at Albert Park early next month, largely because of the "ginormous" talent that is Lewis Hamilton, the current drivers' world champion. 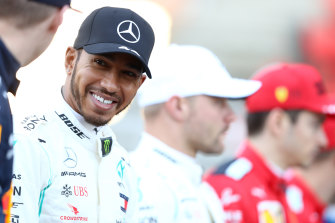 Lewis Hamilton has won the past three F1 world championships for Mercedes.Credit:Getty Images

"I think Merc will be too tough for them to handle, operationally and with Lewis," Webber said.

"The power unit is incredibly reliable with Mercedes, and Ferrari have shown signs of weakness in reliability phases.

"I would love to see Ferrari sitting on the front row … they were very good in qualifying last year, but there are no points in qualifying, you have to put the race together.

"That's where Mercedes and strategy and Lewis (comes in). It's the whole thing. They just slowly strip you down."

Webber says he would love to see Red Bull Racing star Max Verstappen throw down a challenge, but is not holding his breath for anyone to usurp Hamilton, who comes into this season with 84 career wins, just seven shy of Michael Schumacher's all-time record.

"Nothing against Valtteri, (but) Hamilton is one of the greats of the sport in the last 70 years. He is a headache for everyone. I don't know who would be comfortable sitting beside him.

"He gave Fernando Alonso a bit of a tune up in Lewis' first season alongside him in F1. Lewis is a ginormous, ginormous challenge for anyone. Valtteri is doing what he can, but Hamilton is a big problem for the opposition.

''He's hungry and he's still tenacious and he is reinventing himself, and that's the extraordinary quality he has which is great to watch.

"I think in the middle of his career a few people were worried that it might not be as long a career as could happen. But then he got it really right back together, whether it was under guardianship of (Mercedes' non-executive chairman) Niki Lauda and (team principal) Toto Wolff, I would have imagined that had a big bearing on it.

"I know he's enjoying a much better relationship with his father, which is great. He's as stable as he's ever been in his life Monday to Friday, and that's a reflection then of how he performs."

Tags: a, greats', Hamilton, of, one, THE
You may also like
Latest Posts