We were promised drama in Saudi Arabia this week, and boy did we get it in the early hours of Sunday morning (AEDT). A hugely dramatic day, one with yet more controversy as Lewis Hamilton escaped censure after being accused of ignoring double-waved yellow flags in practice, ended with Mercedes’ seven-time champion on pole for the Saudi Arabian Grand Prix while his title rival, Red Bull’s Max Verstappen, was forced to trudge back to the pits after clipping the final corner on his final flying lap. It could prove the costliest error of the young Dutchman’s career.

Verstappen had looked certain to claim what could prove to be an extremely important pole, given the potential for first-lap chaos at this new street circuit, which has all the jeopardy of Monaco, with concrete walls and little run-off, but with the speed of Monza. 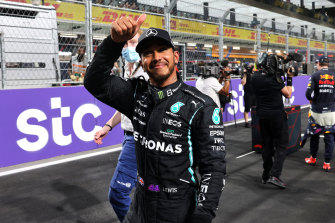 Lewis Hamilton is on pole in Saudi Arabia.Credit:Getty Images

Red Bull’s championship leader, who leads Hamilton by eight points heading into the penultimate race of the season, was on a flyer, turning the timesheets purple as he lowered Hamilton’s mark through the first two sectors of the Jeddah Corniche Circuit, trying to improve on P3. But he was clearly on the ragged edge, pushing dangerously close to the car’s limits. He had nearly lost control a couple of times even before he reached the final corner and locked up, losing the rear end and clipping the wall.

While Hamilton celebrated with his team back in the pit lane – and it was double joy for the Briton with teammate Valtteri Bottas registering the second fastest time to make it an all-Mercedes front row – Verstappen was faced with a lonely walk back to his garage where the faces were grim.

Could it prove to be the moment the momentum swung decisively in Hamilton’s favour? Time will tell. But it had that feeling.

Red Bull team principal Christian Horner looked like someone had just punched him in the solar plexus. It could have been a stray arm from Verstappen’s father, ex-F1 driver Jos Verstappen, who was caught by the cameras banging his fist on a desk in frustration.

“I don’t really know what happened,” Verstappen said once he had made it back and removed his helmet, describing his error over his team radio as “very stupid”. “I locked up, tried to keep the car on the track to finish the lap but I clipped the rear and had to stop. 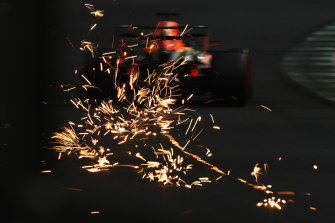 Max Verstappen crashed in his final flying lap and will start from third.Credit:Getty Images

“P3 is a bit disappointing but nevertheless, it shows that the car is quick and let’s see what we can do in the race.”

Hamilton, who will be delighted to have Bottas between himself and the Red Bull, will be incredibly relieved at the way a tricky day panned out. He did not look entirely at the races in final practice, which was topped by Verstappen. Hamilton was summoned to the stewards on two counts afterwards, firstly for impeding the Haas of Nikita Mazepin, and secondly accused of ignoring double-waved yellow flags. It felt at that point as if his entire season was in the balance. A five-place grid penalty – which was what Verstappen received at the last race in Qatar – might have been terminal for his title bid. And the half an hour or so after he went in to see the stewards was one of huge tension in the paddock. Red Bull were licking their lips in anticipation of a penalty, but they were to be disappointed.

“On-board video clearly shows there was no yellow flag displayed, no yellow lights were displayed to that driver and the yellow warning light was not visible on the driver’s steering wheel,” read the verdict from the stewards. Red Bull were doubly disappointed when Hamilton escaped with only a reprimand and a €25,000 (about $40,500) fine for impeding Mazepin. But they decided against appealing against either verdict.

It all amounted to a serious let-off for Hamilton, who had entered the day under huge pressure to comment on his team’s latest sponsorship deal, with cladding firm Kingspan, who are one of the manufacturers involved in the Grenfell Tower disaster.

The Grenfell Next of Kin group had written directly to Hamilton urging him to condemn his own team, while cabinet minister Michael Gove got involved on Friday, threatening to review the law over sponsorship in F1 if Mercedes did not drop the firm while the Grenfell inquiry remains live.

Hamilton must be furious with his team for having got themselves caught up in such a sensitive matter at such a critical moment in his season. But he did not duck the question when it was put to him by The Sunday Telegraph, answering with characteristic thoughtfulness and humility and managing to suggest, in the most delicate way possible, that he was not in favour of the deal and even hinting that it might not last.

“I had nothing to do with the team signing any of the sponsors,” he replied when asked whether he had been aware of the deal before it was announced on Wednesday.

“Tommy [Hilfiger] was the only [sponsor] I probably brought to the team. It was news to me when I heard the things that have happened this week and I was very aware and watching closely all the families affected by what happened there.

“It is really nothing to do with me and I know Toto [Wolff, Mercedes team principal] is sorting it. Unfortunately my name is associated with it because it has been on my car but whether that remains the same, we will see.”

The Kingspan deal, which is believed to be worth up to £3 million (about $5.6 million), may not survive the season. But Hamilton is still scrapping away in this title fight. “No doubt they’ll be quick tomorrow in the race,” he concluded when asked for his race tactics. “So it’s just about being collectively smart and working as a team. I think also just enjoy it.

You can say that again. You cannot take your eye off this championship for a second.