Frenchman Pierre Gasly raged that he “could have killed myself” after driving at speed past a recovery vehicle sent out in heavy rain while the safety car was deployed at Sunday’s Formula One Japanese Grand Prix.

The race was stopped shortly afterwards.

Gasly was overheard saying: “I could have killed myself. There’s this f—ing tractor while I’m driving flat-out.”

The 26-year-old, who had hit a sponsorship hoarding dislodged by an opening lap crash for Ferrari’s Carlos Sainz, had pitted for a new front wing and was trying to catch up with the rest of the field.

Sainz’s crash was one of a number of first-lap incidents, as drivers struggled with poor visibility and scrabbled for grip on the rain-soaked asphalt. 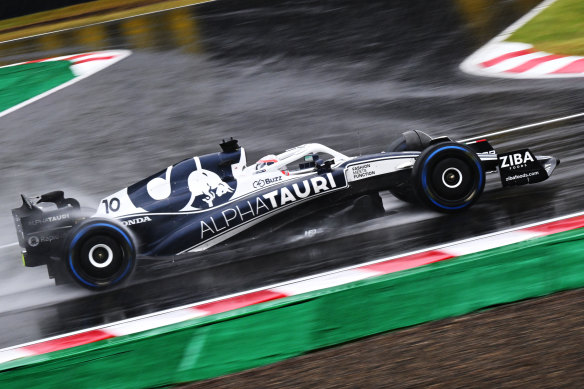 Pierre Gasly on track during the F1 Grand Prix of Japan on Sunday.Credit:Getty Images

Pictures showed the light panels by the side of the track change to red from yellow just before Gasly drove past the recovery vehicle.

The sport’s governing body, FIA, said the race had been neutralised by the safety car.

Stewards said they would investigate the incident, with Gasly under investigation for speeding under red flag conditions.

Other teams and drivers expressed their concern at an incident that stirred memories of Frenchman Jules Bianchi’s crash at the Japanese Grand Prix in October 2014.

Bianchi suffered severe head injuries after colliding with a recovery vehicle in the wet, and died in hospital in July the following year.

“How’s this happened!? We lost a life in this situation years ago. We risk our lives, especially in conditions like this. We wanna race. But this … unacceptable,” said McLaren’s Lando Norris on Twitter.

“I think we need to discuss a tractor on track … we can keep it short: this must NOT happen, guys,” said Austrian former racer Alex Wurz, chairman of the Grand Prix Drivers’ Association.

Sainz told Sky Sports television: “I still don’t know why we keep risking, in these conditions, having a tractor on track. You were going to red-flag it anyway, so why risk it?”

Red Bull’s Max Verstappen, hoping to wrap up a second successive title, led from pole position at the red flag, with Ferrari’s Charles Leclerc in second.

There was no indication of when the race might resume, with the clock ticking down.