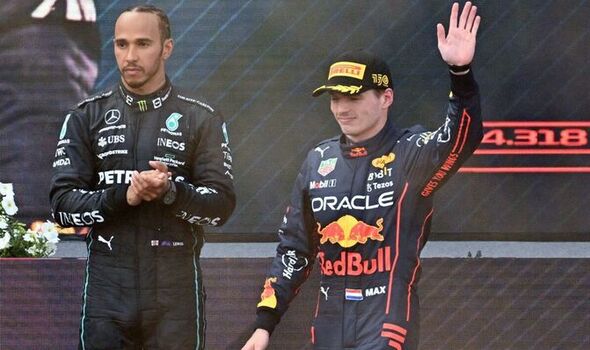 Lewis Hamilton has been slammed by Rudy van Buren for his “s***** move” on Max Verstappen at the Brazilian Grand Prix when the pair collided early in the race. Van Buren recently joined Red Bull Racing as a simulator test and development driver, a position to help Verstappen and Sergio Perez improve their car behind the scenes.

He also holds a close relationship with Verstappen with the duo teaming up in sim-racing with Team Redline. And it’s clear where Van Buren’s loyalties lie when reviewing the incident involving both Verstappen and Hamilton last weekend.

The reigning two-time world champion was deemed at fault by race stewards for the collision and given a five-second penalty. But Van Buren has attacked Hamilton for his role in the incident, calling the Brit a “d***”.

“Wow, what a s***** move that was! People will say I have orange glasses on, but no, not at all,” he said on the RacingNews365 podcast. “Hamilton is squeezed on the brakes from the outside. If you watch the onboard, you can hear him accelerating in the corner give to drive his car wide.

“Normally he wouldn’t do that and then Max is 80 per cent wrong and that’s enough. The rules say you have to sit in front of the middle of your competitor’s car, then you deserve to be given space. And Hamilton doesn’t give that.

“He sends in, just like he did with Alonso at Spa. He puts himself on the chopping block. In fact, even if Lewis had given room, he would have held the position.

“Then they would have come through the corner together and argued on the way to turn four, but that’s racing. Now Hamilton is throwing away his own winning chances, because the Red Bull was structurally too slow.

“Max wouldn’t have won that race without that incident. But Hamilton just has something against Max. As soon as he is overtaken in a nice way, in this case from the outside in turn one – and then you’re already a bit of a d*** in his position – then off together.”

Hamilton and Verstappen will fight it out one final time this weekend at the Abu Dhabi Grand Prix with the seven-time world champion looking to keep up his record of winning at least one F1 race in every season he’s competed in the sport.