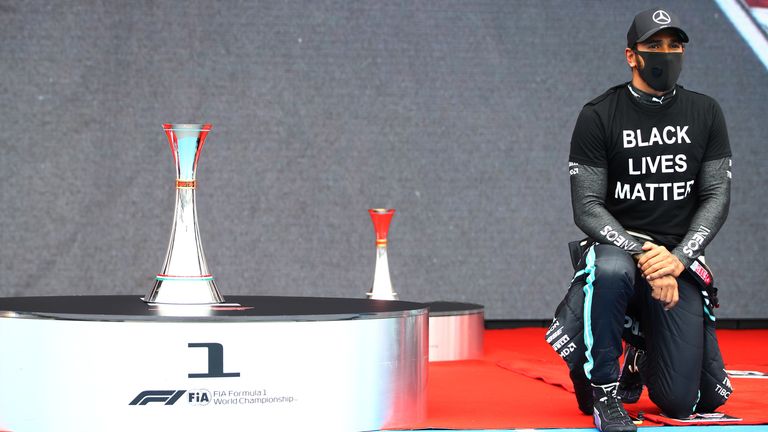 Lewis Hamilton has criticised Formula 1 for a “rushed” pre-race anti-racism display at the Hungarian GP, and says he will speak to officials to ensure drivers – who again did not all take a knee – are given more time to send their message.

F1’s drivers were again wearing the ‘End Racism’ T-shirts, while the same message was displayed on a board behind, as the majority gathered to make a stand against racism and discrimination ahead of the Hungarian national anthem.

Normally the drivers assemble at the front of the grid for the anthem but Sunday’s ceremony took place under the podium, with the FIA sending a note to teams beforehand to say that drivers need to gather in front of the giant LED screen.

Many arrived late, and only eight of the 15 drivers who arrived in time for the pre-race ceremony joined Hamilton, the sport’s only black driver, in taking a knee – a gesture which has been common and collective in other sports.

“Moving forwards we need to speak to Formula 1,” Hamilton told Sky F1 after winning the wet-dry race. “They need to do a better job. It was such a rush. I was getting out of the car, running over, and quickly taking the knee.” 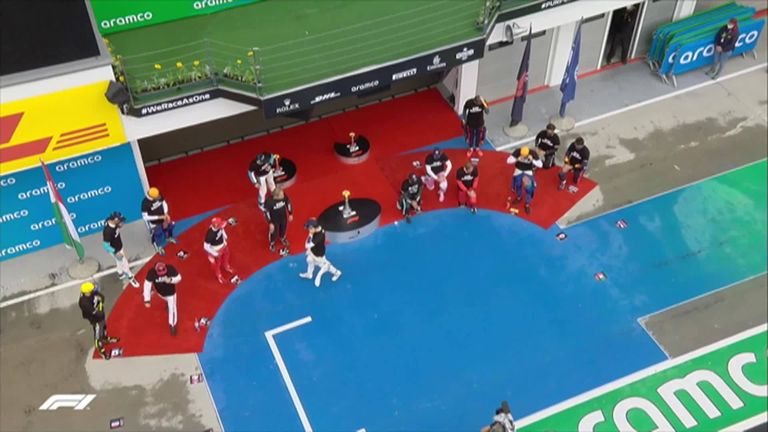 But the sport only organised a formal anti-racism display for the opening race in Austria. Drivers gathered at the front of the grid at their own accord in the second race, with 12 of 16 taking a knee.

“They need to do more, and I don’t know why they only did it for the first race at the start, they’ve not done it since then,” said Hamilton.

“They’ve come out saying they’re going to be fighting for diversity and End Racism, but they’re not giving us the platform to continue that because it’s all rushed.

“I think they can give us more time. I’ll probably send an email over the next couple of days, try to coordinate with them. They do want to do it, it’s just I guess there was not good enough communication.” Romain Grosjean, a director of the Grand Prix Drivers’ Association which all the current grid are members of, admitted prior to the weekend that no decision had been made on drivers making a collective stand and taking a knee ahead of the race, with one to be made in the Friday briefing.

But Hamilton contested: “He doesn’t think it’s important to do it. He’s one of them that thinks that it was done once and that’s all we need to do.

“So I tried to speak to him about what the problem is and it’s not going away and we have to continue to fight for it. I think this time he didn’t mention anything in the drivers’ briefing and neither did Sebastian [Vettel, another GPDA director].

“Sebastian and I messaged each other and he stressed, as did I, the importance that we continue to do it.”

Of the drivers who didn’t take a knee in Hungary, Hamilton added: “With the other drivers, there’s not a lot I can do.

“I gave a lot of energy in Austria to try and convince a couple of the drivers and it’s a battle. But I think what’s important is the one’s that are doing it, the understanding I think is fantastic.

“Who knows… my dream is that one day, the other drivers come round to it. If we get to the last race and we’re kneeling down and showing that we’re all united, I think that would be beautiful.”

“At the end of the day it [taking a knee] is a symbol of support – it’s a sign of support from the drivers. Clearly there isn’t unanimity there, we’ve seen that since the first race. That’s one thing. But the fact that you’ve got Lewis kneeling, you’ve got other drivers walking in and out, the whole thing just looked chaotic.

“I contrast that with what I saw at the start of the Test match between England and the West Indies, which was to me a really powerful sign. You had everybody, the players and the non-playing members of the teams, by the boundary line and that to me looked like a really well organised effort.

For referee officiating his first NBA Finals, the assignment is a ‘heart-racing moment’

NASCAR schedule 2021: Bristol dirt race, road courses headline Cup Series changes for next season
Recent Posts
This website uses cookies to improve your user experience and to provide you with advertisements that are relevant to your interests. By continuing to browse the site you are agreeing to our use of cookies.Ok